Share All sharing options for: Cowboys compete early but lose 45-10 to TCU 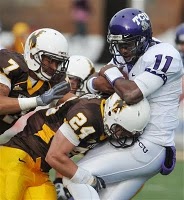 Can anyone or any team stop TCU you this year? Not likely. The Horned Frogs improved to 11-0 for the first time in 71 years and are keeping the National title hopes alive with a 45-10 over the Wyoming Cowboys on the road. To complete their perfect season TCU will just need a victory next week over a New Mexico team that has lost their first 10 games.

The Cowboys kept things close for most of the first half and the game was was tied 10-10 at one point. But just as fast as Wyoming thought they had an upset on their hands TCU took back the lead with a 81 yard kickoff return by Greg McCoy to make the score 17-10. After that TCU never looked back and went on to score 28 unanswered points.

This wasn't as crisp a victory as TCU was looking but it was probably good enough to keep them in the #4 BCS spot. Losing three fumbles is uncharacteristic of the Horned Frogs and one was returned by Safety Chris Prosinski for the Cowboys lone touchdown. Andy Dalton was 10 of 19 for 170 yards and a touchdown but also intercepted once. Dalton also added 90 yards rushing to give him 260 total yards for the game.

The ground game was dominate for the Horned Frogs who put 358 yards rushing. Matther Tucker had 134 yards on only 12 carries. Tucker and Joseph Turner each had two touchdowns a piece.

Wyoming could do nothing with all the ball all game. QB Austyn Carta-Samuels was 4 of ten for only 84 yards. He was then replaced by Robert Benjamin who also struggled and went 2 for 5 and just 11 yards. Karsteen Sween the came in to try his luck to jump start the offense and went 0 for 4. David Leonard had his longer catch of the season for 43 yards and give him 64 receptions on the year.

The TCU defense was stout and made things rough all game long for the Cowboys. Though only getting one sack on the day they kept constant pressure on QB and bottled up the running game. The Cowboys rushed 36 times for 84 yards an average of 2.3 yards per rush. The Horned frogs allowed the Cowboys only 58 total yards in the second half.

Beating Wyoming should help TCU with the computers. Wyoming has one of the toughest schedules in the nation with losses to ranked teams: Texas, BYU and Utah. Texas played in Laramie this season and were actually down 10-6 at one point before prevailing 41-10.

It would have been great to see this game be closer but with the team the Cowboys have right now they've shown they just can't compete with big time programs yet. Playing against this level of competition will be great down the road though as all the freshman are getting valuable experience. Keeping things close in the first half like we did against Texas was nice to see. Definetly better than the BYU loss which had no redeeming qualities.

Next week: TCU host New Mexico and Wyoming travels to Colorado State for the Border War. Wyoming needs a victory over the rival Rams to become bowl eligible.

Cowboy Joe: Senior Chris Prosinksi scooped up a TCU fumble and returned it 98 yards for the Cowboys only touchdown.

Cowboy Low: Cowboys ground game. 36 carries for onl 84 yards and a long of 8.