Cowboys pull out a thriller in San Diego

Share All sharing options for: Cowboys pull out a thriller in San Diego 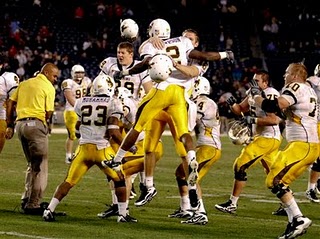 Down 27-6 heading into the fourth quarter it looked like the Wyoming Cowboys dreams of a bowl berth were fading faster then the seconds counting down on the clock.

But suddenly things started to click for a team that had managed only 16 points in the last 15 quarters. QB Austyn Carta-Samuels scored on a 10 yard run on the second play in the fourth quarter to make the score 27-13 in favor of the Aztecs. The Cowboys stopped the Aztecs and got the ball back on their own 27. After working down the field and into Aztec territory Alvester Alexander busted a 33 yard touchdown run to make the score 27-20 with ten and a half minutes remaining in the game.

San Diego State got the ball back and put together a 11 play 5:29 long drive that stalled on the Wyoming nine yard line. A 28 yard field goal attempt by Lane Yoshida was blocked and recovered by Tashaun Gipson of the Cowboys and returned to the Wyoming 38. The Pokes put together a solid drive highlighted by long runs by Alvester Alexander and Brandon Stewart. Austyn Carta-Samulels found freshman TE David Tooley for a 9 yard TD pass and tied the game at 27-27 with 2 minutes and 3 seconds remaining.

The Cowboys kicked a pooch kick on the ensuing kickoff that was fumbled by the Aztecs and recovered for Wyoming by Kenny Browder at the San Diego 44 yard line. Slowly the Cowboys crept down the field before Ian Watts kicked a 43 yard field goal with 23 seconds remaining to give the Cowboys an improbable 24 point come back and 30-27 victory.

With the victory the Cowboys improved to 5-5 (3-3 Mountain West) and kept their bowl chances alive. The Cowboys will now need to win one more of their remaining games: 11/21 vs TCU or 11/27 @ CSU to secure a bowl game.

San Diego State (4-6,2-4 MWC) was in control most of the game and looked they were cruising towards a victory with their 27-6 lead after three quarters. The Aztecs will have to beat Utah on the road next week and UNLV in Vegas if they want a shot at a bowl game. Buzz had been building the last couple weeks as the Aztecs had won some big games in the middle of the season over Colorado State and New Mexico that gave them hopes of playing in December.

QB Ryan Lindley didn't have the offense humming for the Aztecs like he usually does and finished 18 for 29 for just 200 yards and no touchdowns. The Aztecs did have one of their best performances on the ground this season as Brandon Sullivan rushed 18 times for 105 yards and two TD's in the first half.

The Cowboys had a rather balanced offense that put up 446 total yards compared to 357 for the Aztecs. Austyn Carta-Samuels went 16 of 22 for 246 yards passing plus 51 yards rushing. He also had one touchdown passing and one rushing.

The rushing attack for the Cowboys was impressive as they put up 200 yards on ground. They were led by Brandon Stewart with 76 yards and Alvester Alexander with 72. Alexander also had a 56 yard reception.

Dave Tooley had his best game of the season as he finished with 4 catches for 70 yards and the game tying touchdown.

The Cowboys won because they played their best in the fourth quarter and made some big plays on special teams. The Aztecs let this one slip away and their bowl chances probably went with it.

Made some big plays when we needed it the most. No way this win would have happened without them. Watts had three key field goals including the game winner.

Poor Poke: Adam Berry and Cory Orth who left the program this week and missed out on this big win. Good luck to both players in the future.