Cowboys add some beef to the O Line

Share All sharing options for: Cowboys add some beef to the O Line 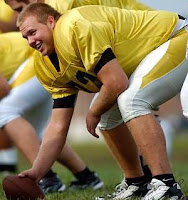 On Sunday the Wyoming Cowboys landed themselves a large recruit for their 2010 class. OL Skyler Hinton from Rock Bridge HS out of Columbia, MO checks in at hefty 6'4 307lbs. After visiting on December 11th Hinton verbally committed to the Cowboys just two days later.

Currently unrated by Rivals and not covered by any other scouting site Hinton is a late comer to the recruitment process. In third game of of his Junior season Hinton suffered a broken fibula in his left leg and had a metal plate placed in his leg. During the spring he had a second surgery to remove the plate. His freshman year was also cut short with a shoulder injury.

After previously playing left tackle in 2008 he was moved to center for his Senior campaign. No doubt that Coach Christensen's roots at Mizzou helped land this off the radar recruit. The fact that he was coming a major surgery probably scared off several schools but the Cowboys may strike gold if Hinton can stay healthy and does some solid work in the weight room.

Northern Iowa is the only other school to offer Hinton and he has a visited scheduled for December 18th. Will see if he actually makes it up to visit next weekend.