Ryan Mathews will eat your children

Share All sharing options for: Ryan Mathews will eat your children 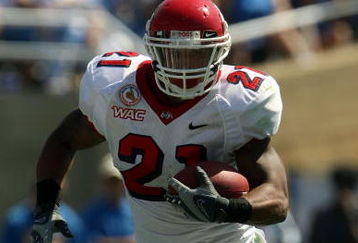 He is so tough that he spells his last name with only one "T". The RB from Fresno State is a beast and stopping him will vital if the Cowboys hope to pull off an upset over the Bulldogs.

Listed at 5'11 220 Mathews is a strong powerful runner with a low center of gravity that is tough to bring down. After leading the nation in rushing for the entire year Mathews suffered a concussion against Nevada that caused him to miss their game against Lousiana Tech. Cleared to play in the season finale against Illinois he posted 173 yards and three TD's.

The concussion is the one wrinkle on a fantastic season by Mathews who had battled the "fragile" label his first two seasons. Due to the missed game Toby Gerhart grabbed the NCAA rushing title this year for FBS. Still an incredible year for the Junior who may be playing his final game for the Bulldogs. If Mathews decides to forgo his Senior year some project him going as early as the second round.

For the year Mathew's has totaled 1,664 yards on 245 attempts for 6.8 YPC. Add 17 touchdowns and the fact that he has NEVER fumbled in his collegiate career makes Mathews by far the toughest running back the Pokes have faced this year.

The key for the Cowboys will be containment. Once Mathews gets into the open field he is incredibly tough to bring down. Fletcher, Unrein and Givens need to attack him in the backfield and slow him down at the line of scrimmage. The linebacker corps needs to make sure they finish off their tackles and not Mathews slip out.


Here are the game by game stats for Ryan Mathews this year:


Highlights from Mathews and his three TD game against Boise this year.