Share All sharing options for: Preview: TCU at Wyoming 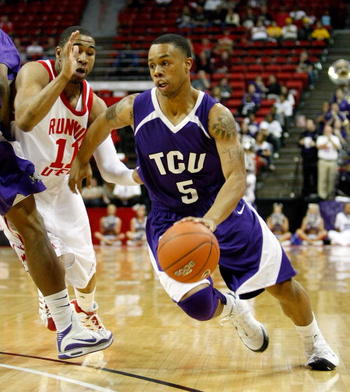 Two of the Mountain West's underachieving programs will meet on Saturday looking to spark their team at the right moment. With six games remaining the regular season chances for wins are shrinking quickly for TCU and Wyoming.


TCU (11-14, 3-7) has lost five of their last six while Wyoming (9-15, 2-8) has lost seven of eight. When these two teams met a month ago in Fort Worth the Horned Frogs pulled out a hard fought 62-59 victory. A lot has changed for the Cowboys during that time and this is a much different Cowboy squad.

Leading scorer Afam Muojeke is done for the season and Freshman Desmar Jackson has stepped up to provide a spark for the Cowboys. With the rise of Jackson the Cowboys saw their third leading scorer A.J. Davis leave the team after his minutes shrunk quickly. Adam Waddell is the most succesful bigman for the Pokes and saved his best performances for the conference games.

TCU has two road victories this season: SMU and Air Force. Beating Air Force isn't that impressive but it is certainly better than what Wyoming managed to do against the Falcons. Ronnie "Tuffy" Moss is the free shooting guard that leads TCU with 14 points a game. The Croatian connection of Zvonko Buljan and Edvinas Ruzgas are also averaging double digits in scoring. Buljan is the second leading rebounder in the Mountain West with nearly nine boards a game. Only Kawhi Leonard of San Diego State has been more productive on rebounds this year.

Will TCU sweep the series or will Wyoming end their losing streak? I say Wyoming will win this one mainly due to the home court advantage of the elevation. San Diego State and TCU are the only Mountain West schools that aren't at elevation and both teams struggle with the adjustment. San Diego State is a much better program than TCU and they lost in Laramie earlier this year.