From Deutschland with skill

Share All sharing options for: From Deutschland with skill 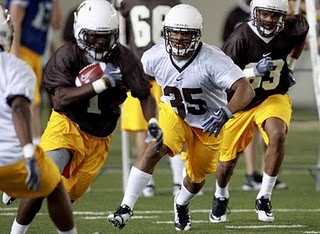 Picture from WyomingNews.com
Back in the winter the Cowboys landed a very unique recruit out of Germany, 23 year old LB Oliver Schober (#35 in the picture). The true freshman never lived in the United States but played football for the local Munich Cowboys team and German national team.
At 6'0 240 lbs Schober is an intimidating figure that will has all the intagibles that coaches look for in a player. Size, strength, skill, instinct and smarts. Originally thought to be competing for the backup spot at MLB, Schober may have also earned himself a spot on the kickoff team. Special teams tackler? Nope. Actual kickoffs.
Christensen was looking for anyone who wanted to give it a shot in the second day of practice and Schober routinely knocked kicks "6 or 7 feet" deep into the endzone.
Most kick returners are probably happy when the kicker is trying to tackle them. With his size and strength this may be the exact opposite with Schober.
For more info on Schober check out this article that appeared in WyomingNews by Robert Gagliardi.