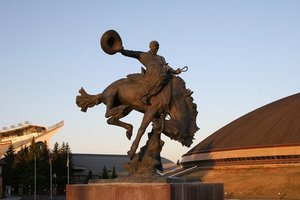 News from across Poke Nation!


Two starting LB spots are taken by Ghaali Muhammad and Brian Hendricks. Keith Lewis and Devyn Harris are locked in a tight battle for the third spot.

Schroyer has the basketball team making huge improvements in the classroom. Over the past three years UW has turned around their men's teams academics that previously was the worst in the history of the Mountain West. Most fans will grumble about more wins but I'm glad Wyoming has changed the atmosphere and students make the most of their scholarships.

Junior CB Tashaun Gipson has been a force the past week and is making a big impression on the coaching staff. His growth in ability could help the Cowboys plan more man defense this year.

WR Mazi Ogbonna is starting to hit his stride after joining the Pokes in the spring from Snow College. His teammates have been impressed so far.

Former Poke John Fletcher signed on with the Arizona Cardinals. Fletcher went undrafted after graduating but deserves a shot with an NFL team. Hopefully he can make the most out of it.