Cowboys grab QB of the future in Cole Stoudt

Share All sharing options for: Cowboys grab QB of the future in Cole Stoudt 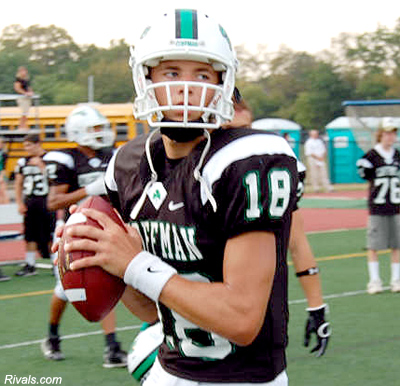 According to Steve Wiltford a recruiting analyst for 247 Sports the Wyoming Cowboys received a verbal commitment from Cole Stoudt a Pro Style Quarterback out of Dublin, OH.  The commitment is actually mentioned at the bottom post detailing the upcoming visit of Cole's older brother Zack to Laramie on Monday the 18th.

The younger Stoudt is listed at 6'4 195lbs and ranked three stars by Rivals.  Currently ranked as the #19 Pro Style QB in the nation.  Cole has numerous offers including ones from AQ schools: Arizona State, Cincinnati, Colorado and South Florida.

There are no other reports of this commitment but Wiltford is in the recruiting business so he knows his stuff.  This is a huge commit for Wyoming who needed to land a big time QB prospect to groom behind Austyn Carta-Samuels.  Cole can redshirt next year which will be Carta-Samuel's Junior season, then after another year behind ACS he could take the helms as a redshirt Sophomore who knows the system and has had two years to develop.

More on both brothers and their football heritage after the jump.

With one Stoudt brother coming to Laramie next year could the Cowboys soon add another?  Zack Stoudt who attends Iowa Western Community College will be making an official visit on October 18th with a couple of offensive linemen teammates.  Coming out of HS Zach was a four star recruit who committed to Louisville.  After a redshirt year and season as a backup he decided to leave when the coaching carousel started.  He landed at Iowa Western and has led the Reivers to an undefeated 7-0 season so far.

Listed at 6'5 225lbs you can see what Cole will look like given a couple years in the weight room. While Wyoming hasn't had great success with JUCO QB's in the past it looks like Zach would quite an addition if he wants to join his younger brother.  Will be interesting to see if this a package deal for the brothers.

This gives the Cowboys five commits on the year, they are expected to sign the maximum of 25 athletes allowed by the NCAA.

The brothers come from the same high school as Brady Quinn and a great family pedigree.  Their father Cliff Stoudt won two Super Bowl rings with the Pittsburgh Steelers in a pro career that lasted fourteen years.