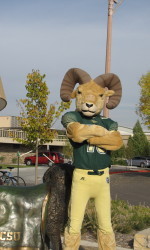 Alright all you CSU haters (Wyoming fans) be on the lookout for a new Ram when you are in Fort Collins.  Colorado State debuted an updated version of their mascot "CAM the Ram".  This new version is a leaner, tougher and more realistic version of CAM.  The old CAM (pictured below) was an overstuffed chair with horns and a giant head. 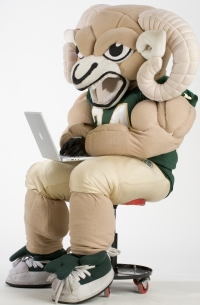 I have to say I think it is an improvement over the old version but it will probably scare the crap out of little kids.  It is pretty easy to improve on the over stuffed pillow they had as a mascot before.  For an in depth look at the design process that was used by a CSU alum click here.  That design is posted on a new CSU blog called Ramifications, which is an entertaining read despite following a terrible school.

With the Border War being in Laramie this year Cowboy fans won't get to witness the new CAM unless he makes the trip up.  Border War is November 20th this year, Cowboys will make it two in a row!

How dumb are Sheep?