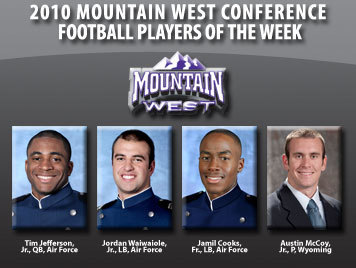 The Mountain West Conference announced their Football players of the week yesterday and Wyoming finally got on the board with Punter Austin McCoy.  The special teams player of the week was co awarded to Air Force LB Jamill Cooks as well as McCoy.  Air Force also swept the Offensive and Defensive honors.

Well deserved honor for McCoy who has been a standout all season for the Pokes.  McCoy is third in nation in punt yards and is his 74 yard punt against Boise State is tied for 7th longest in the NCAA this year.  With an average of 44.8 yards per punt and net average of 44.8 McCoy does a great job of putting the opponent at a disadvantage in terms of field position.

Love the fact that McCoy has been so effective this season I just hope the Pokes don't have to utilize his talents so often the next seven games.

AUSTIN MCCOY, WYOMING
Junior, Punter, Winter Haven/Fla./Winter Haven HS
Austin McCoy helped Wyoming control the field-position battle in the Cowboys' 20-15 victory at Toledo on Saturday night, limiting the Rockets to zero return yards on eight punts. McCoy placed two punts inside the Toledo 10-yard line, at the 6 and 4-yard lines, respectively, and also forced the Rockets into two fair catches. McCoy's lone punt that was returned resulted in no gain. On the Cowboys' first possession of the second half, McCoy lined up to punt at Wyoming's own 42-yard line with the Cowboys facing fourth and 14. The Winter Haven, Fla., native executed a fake punt, hitting cornerback Marcell Gipson on a pass that resulted in a 34-yard gain and led to a Cowboy field goal that gave them a 20-0 lead. McCoy's longest punt of the evening was 49 yards. Overall, he averaged 37.4 yards on eight attempts.