Mike Cane of the Herald in Everett, Washington has reported that Zach Berg out of Edmonds - Woodway HS committed to Wyoming earlier this week.  Coach Christensen an Everett native is again recruiting from his home state.  Last year the Pokes grabbed two recruits from the Seattle area so Christensen has done a good job recruiting from his roots.

Berg is listed at 6-1 202lbs by Rivals and listed as a safety.  Currently not ranked by any recruiting service Berg still seems to be quite the find for the Cowboys.  More player info and Berg's highlight video after the jump. 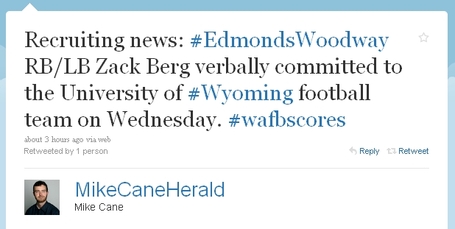 Berg can play all over the field and seems to excel at every position. Don't believe me?  Berg is currently playing OLB, safety, running back, punter, kick returner, punt returner and handles kickoffs.  So he doesn't play QB but his team does run the wildcat and he can throw the ball.

He is pretty busy during the game as shown his highlight video.  He's had a great start to his Senior year and scored six total touchdowns in the second game of the year.  For the year at running back Berg totaled 1302 yards, 7.1 yards per carry and 21 touchdowns.

After watching his highlight video I have to say I really like the aggressive way Berg plays on both sides of the ball.  The Pokes do need to sign at least one RB this year since they only have two running backs on scholarship, three if you count Robert Herron who also plays WR.

Wyoming is now at eight verbal commitments for the 2011 class.