Q&A with OBNUG. Plus a bet between the two sites.

Share All sharing options for: Q&A with OBNUG. Plus a bet between the two sites. 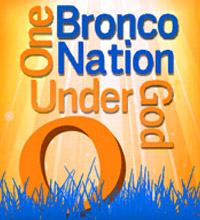 Kevan Lee from One Bronco Nation Under God and I swapped Five Questions and put a little wager down on this weeks game.  The winner gets a free post on the losers site.  No points are given just whoever gets a W.  To see my answers to Kevan's question click here.

Based on some his answers looks like there will be a nice rivalry developing with Boise over the next few years and interesting to see how Nevada and Fresno State fit into the Mountain West.

Q&A after the jump.

What do you think of Wyoming as a neighbor and a future conference member?


I drove through Wyoming once and immediately swore I would never do that again. That drive was the worst. The only thing keeping me going were those constant signs for Little America, and come to find out it was nothing more than a glorified Flying J truck stop. I almost burned the whole thing to the ground right then and there. (I got a nickel ice cream cone instead.)

Secretly, I have always been a fan of Wyoming athletics, possibly because of the team colors, possibly because I admired anyone who would willingly choose to spend four years playing ball in a windstorm. Cowboy teams are plucky and hard-working and most definitely not BYU, so it's a win-win-win. I'm excited to have Wyoming on the schedule every year and not just because somebody needs to absorb the orphaned New Mexico State hick jokes.

How do you feel about Nevada and Fresno State joining the Mountain West?


I'm not sure you'll believe me when I say this, but Fresno State and Nevada are scummier than BYU. I disliked them before, but I really can't stand them now. It's kind of funny that I feel this way since they are the main reason why the Mountain West still exists, but what they did to the WAC was just low. You don't say you are going to do something and then go and do the opposite. And this time, I am not referring to "winning the WAC" or "playing defense."

Nevada and Fresno will be fun to keep around for eternity, but I don't know if I'll ever look at them the same again.

How would Boise really do if they played in the SEC?


To play this what if game correctly, we need to assume that Boise State will have had 10 to 15 years in the SEC for the Broncos to get SEC money to pay for SEC facilities to recruit SEC-caliber athletes. If all that happens, then Boise State would be at the top of the conference on a regular basis.

What is the kryptonite of the Broncos?

Can you be your own kryptonite? If so, then I would say that Boise State is Boise State's biggest weakness. The Broncos made a lot of unforced errors against Virginia Tech, fumbling and penalizing up and down the field. If Boise State gets in a habit of shooting itself in the foot, someone is going to make them pay sooner or later. It could be Wyoming this week. It could be Wyoming next year. It had better not be Nevada or Fresno, though, because as I said above, they are the worst.

Blue field = marketing genius. Red field = eyeball torture. Seriously, every single EWU season ticket holder is either going to be legally blind with the world's worst astigmatism or subconsciously rage-filled after taking in so much red for such a long period. Watching a game on that field is going to be like staring into the sun for three hours.