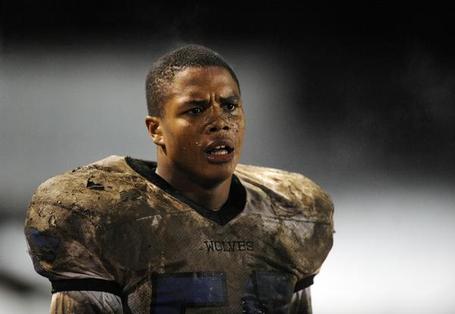 More recruiting news for Wyoming as LB Eddie Yarbrough from Grandview HS in Aurora, CO committed on Thursday according to Rivals.  Listed at 6-3 235lbs he presents an imposing figure when lining up behind the defensive line.  Rated three stars by Rivals with a 5.7 score he is just one below a four star rating.  He ties fellow 2011 commit QB Adam Pittser as being the highest ranked recruits to choose Wyoming since the inception of Rivals ratings being introduced.

Here is his highlight video from ESPN, it wouldn't let me embed it.  I would say he doesn't hit the ballcarrier - he punishes him.  Here is the analysis of Yarbrough from ESPN.

Yarbrough is a tough run stopper with some limitations in pass coverage. Has the size and playing strength for the inside linebacker position at the major level of competition. Shows the flexibility, balance and agility necessary to make plays from inside to the edge; displays good K&D run recognition skills

This is a huge get for Wyoming and nice boost for the Wyoming defense.  Yarbrough is ranked by Rivals as the sixth best prospect in the State of Colorado and 31st OLB in the nation.  With his size he could play a number of positions: OLB, MLB or even move to DE.

More recruiting news after the jump.

The Pokes did suffer one recruiting casualty this week as DB Demarius Reed from Chicago has opened his recruitment.  Reed was recruited by Jerry Montgomery who left Wyoming last week to join the staff at Indiana.  Reed has already visited Eastern Michigan and Ball State this month and will visit Indiana this weekend.

Never great new to lose a recruit but the Pokes have plenty of depth at that position on the current roster and their current recruiting class. He is rated two stars by Rivals but I was pretty high on him.  This means the Cowboys are at 22 commits with 12 days left until National Signing Day on February 2nd.