Share All sharing options for: November Panel of Pokes: The Border War

We're back for another edition of Panel of Pokes and of course we're going to talk about the biggest game of the year. It's Sheep Week and Wyoming and CSU will meet for the 103rd time this Saturday. This is the latest the Border War has ever been played and first time these teams have ever met in December.

I wanted to get the thoughts of our panel on what exactly the Border War means to them.

Here was the topic this month:

What does the Border War and rivalry with Colorado State mean to you? What do you want to see from Colorado State besides not winning the Bronze Boot? It is better to have CSU succeed when not playing Wyoming or is it more enjoyable to see your rival fail?

Take a look at the responses after the jump. Feel free to post your Border War thoughts and memories in the comments.

The Border War is most definitely the biggest game on the schedule for the Cowboys. It may not always be the most important in terms of conference championship on the line, etc but you can guarantee that every Cowboy on the roster knows his #1 job is to Beat the Sheep. Keeping the Bronze Boot in Laramie is incredibly important to the Cowboys. As a wee lad growing up in the badlands of Worland my first Wyoming football game was in 1993 and it happened to be a sold out Border War.. and that game was frigging cold! I remember being really irritated (I was 11 at the time) because my Mom was making me put on snow pants and snow boots.. I didn't want to because I was 11 and I didn't want to look like a tool. I remember the whole family went, brothers, sisters, aunts, uncles, cousins, grandparents.. we made it a weekend in Laramie. The Pokes were blown out that weekend, but we had a blast. I remember waiting behind the War trying to get an autograph from my favorite player, Joe Hughes... Joe never ventured out of the locker room, but to my surprise someone else did, Wyoming's biggest star, Ryan Yarborough. He autographed my hat.. with my Mom's hot pink pen. So if I didn't feel like a tool in snow pants, I just got Wyoming's biggest star's autograph with a pink pen. FML. To this day I still have the ticket stub locked up and a commemorative coin from the season in my pants pocket every day. That pretty much sums up my thoughts on the Border War.. they're all important, the Pokes have a gap to close in this series, BEAT THE SHEEP!

As far as what I'd like to see out of the Sheep, I'd like to see another goose egg on the score board for them. Nothing brings a smile to my face more than seeing goose eggs as the clock ticks to zero and the Sheep lose another Border War. I don't have the same hatred for the Sheep that I do for BYU, but I really enjoy this historic rivalry and hope it continues for a very long time. Plus, how could I wish any more pain on my buddy Joel over at RamNation.com than he's already experiencing with this season. You might be leading the all-time series, Sheep, but the Bronze Boot has spent more time in Laramie than it has in Fort Collins!

I'm a little conflicted on the last part of this question, as the series is always more fun to watch when both teams are operating at a high level and there's more at stake (bowl positioning, etc), but I also kinda like watching the Sheep fail, much like they watched us fail in the early part of this century. I don't know if I can answer this question real straight forward, but a game when both teams are clicking on all cylinders makes it great.

One final thought on this...... BEAT THE SHEEP! (#BTS if you're following along on Twitter!) 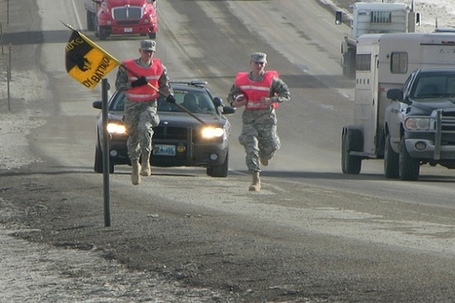 I think this is an important rivalry because of the long tradition of the game and close distance between the schools. On many levels this rivalry is important whether talking pride between the alumni and fan bases which live in each others back yards. I live in Colorado and know many CSU grads and the pride of your school winning goes a long ways, while you have to factor in the head-to-head recruiting between the schools and advantage Wyoming will have in the recruiting area, if they can win their third straight against the Rams.

Having CSU not succeed in football is a good thing, but it does add to the gameday atmosphere of both stadiums when both schools are playing at a high level.

Those games in the 90's were real barnburners with Sonny Lubick coaching against Joe Tiller and Dana Dimel. I remember the fog game in 1998 when the Pokes beat the Rams on ESPN in Fort Collins. The atmosphere was big time, the stadium was sold out and great feeling walking out with wins in 1996 and 1998. The game in 1997 in Laramie was the largest crowd to ever watch at War Memorial Stadium and another big time atmosphere.

I'd like to see this game moved back to the middle-of-the-season, when both schools still have hope for bowl game eligibility or a conference championship. I think it would add to the intensity and help with selling out the games in both Laramie and Fort Collins. Until both schools are playing well at the end of the season, it's going to hurt attendances and a midseason game would enhance the fan participation. 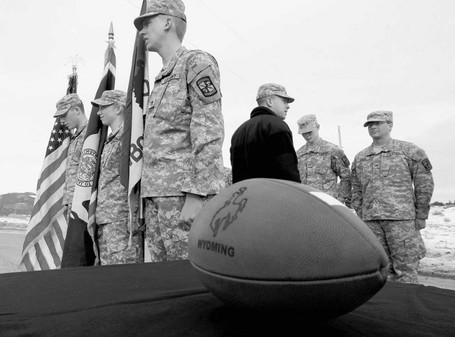 Wyoming’s rivalry with Colorado State is the be all and end all of Wyoming football. Rivalries are the reason the college game is played and with the departures of BYU and Utah the Colorado State rivalry takes on even more significance because it’s about the only real conference rivalry we have left (with Air Force being a distant second). I have always joked that Wyoming could be 1-11 and still have a successful season if that one victory was against CSU and we kind of found out the truth in that statement when we finished our 3-9 season last year with a 44-0 thrashing of the sheep.

To maintain a healthy rivalry it is important that both the Wyoming and Colorado State football programs are strong. Do you think the sheep took much joy from the series when beating us 8 out of 11 times from 1999-2008. Sure it was fun but how much joy can you take when beating a program that is completely in the doldrums? The same can be said for us over the past few years, sure we have won 3 of the last 5 and have a chance to win 3 in a row for the first time since the late 80’s and nothing has made me happier but I would be a whole lot happier if Colorado State was any good because beating our rivals would be an actual accomplishment. 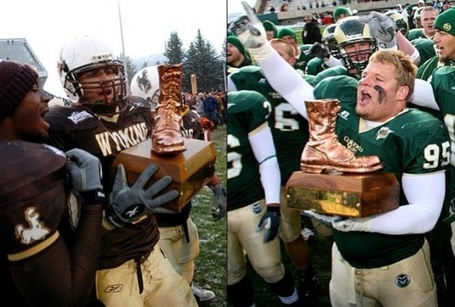 The Border War is always the most important game on the schedule for either team. No matter what happens during the first 11 games this one really matters. This is evident as despite having a 2-9 record last year Wyoming came in and won 44-0. That certainly helped ease some of the pains for Cowboy fans after a rough season. The could sleep easier in the off season knowing that they had put a whooping on their rival.

For me the Border War is very special since I'm obviously a Wyoming fan. My brother however lives in Fort Collins and supports the Rams. I never lived in Wyoming or went to school in Laramie so I've never had a chance to attend a Border War. This year that is changing as I will be flying from Seattle with my 20 month old daughter in order to attend the game. So essentially my family is a house divided and I'm sure there are others that have a similar situation.

As far as the success of CSU goes I root all the Mountain West schools when they are playing out of conference games. I'm a huge fan of the conference itself and the better the league does then more revenue streams may open up. The only tough thing right now is that it has been so long since both schools were good at the same time. In 2008 the Rams needed a Border War victory to become bowl eligible but the Cowboys weren't any good. Then the teams flip flopped in 2009 with Pokes gaining bowl eligibility with a victory. I'm not opposed to the Rams going to a bowl game, but I never want them to beat Wyoming and have the Bronze boot again.

It would be a perfect weekend if the Cowboys can keep the Boot, get an eighth win and put the final nail in the coffin of Steve Fairchild's career at CSU.

The "Border War" has been played over 100 times over the years and 43 times for the coveted Bronze Boot. The Bronze Boot added something to this rivalry that you do not see in other rivalries in college football.
Introduced in 1968 the Bronze Boot was worn in the Vietnam War by Cpt. Dan J. Romero, an Adams State College graduate and Army ROTC instructor at CSU between 1967 and 1969. I see this boot as a way the two schools honor the soldiers of this great country. The boot means so much to both schools since the boot was introduced Wyoming leads the series 22-21 and even when one school has a down year you never know what will happen in this game.
The coolest part of this rivalry though has to be the running of the game ball down route 287 in Wyoming and Colorado. Each year the visiting team’s ROTC runs the ball to the state line and then gives it over to the home teams ROTC who runs it to the stadium the game is going to be played in. If you have never seen it, it is something you have to see; other schools may have better known rivalries but none carry the tradition of the Wyoming/CSU rivalry and that has to be the best part of the "Border War."