The full press of Wyoming recruiting in the state of Washington continues to pick up speed. Last week we reported that the Cowboys offered three athletes from the Seattle area. That list looks to be expanding with two more offers being handed out according to Mason Kelley of the Seattle Times.

In some disappointing news, Woodinville's Sawyer Whalen recently had his offer to Portland State pulled, while Federal Way linebacker Jordan Pulu, no longer has the offer he accepted from Washington State.

Both players are currently looking into alternative options. I was out at Federal Way Wednesday and I was told that defensive lineman Uso Olive -- a Portland State commit -- running back D.J. May and Pulu all have offers from Wyoming among others.

The Cowboys have done a very good job in Washington recently. They have locked up some talent that has slipped below the Pac-12 radar, athletes who should really help the program.

Again we knew D.J. May had been offered but not his two teammates. Jordan Pulu and Uso Olive were both first team 4A all-state which is the highest division in Washington. 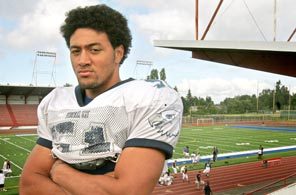 Pulu is listed at 6-2 235lbs and plays inside linebacker, he originally committed to Washington State this summer. With Paul Wulff out and Mike Leach in at Pullman it seems that Pulu lost his offer. ESPN has him rated at three stars and the 26th best inside linebacker nationally and 9th best prospect in the state. Wyoming may have the inside track on Pulu since he is familiar with Washington State linebacker coach Chris Tormey. It just happens that Tormey is the leading candidate for the Pokes defensive coordinator position.

Wyoming does not have any inside linebackers committed in this recruiting class and it would be a huge steal land a talent like Pulu. 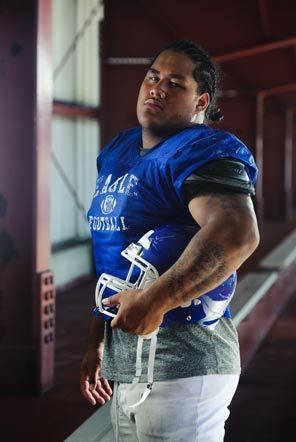 The offer to defensive tackle Uso Olive (pronounced O-LEE-VAY) should be exciting news for Cowboy fans who would love some more help on the d-line. Listed at 6-1 293lbs Olive is currently committed to FBS school Portland State which is a member of the Big Sky Conference.

Hopefully he'll visit Laramie this January and take advantage of the opportunity to keep playing football with a couple of his high school teammates and a bigger school. As a junior he played both ways but certainly prefers playing defense.

"I love having him in front of me," Pulu said. "He's so strong, he can take two or three linemen away from me and I'm free to make plays."

While physically strong he is also emotionally strong after losing his mother this year.

Scout currently rates Olive as a two star recruit and also lists an offer from Montana. Meanwhile Rivals has him unrated but with an offer from Arizona State.

Both Pulu and Olive were named to all defensive team by the Seattles Times:

Olive is an usual blend of power (he bench presses 445 pounds and squats 605) and speed (5.0 seconds in the 40-yard dash). He had 12 tackles for loss as the Eagles went 9-0 during the regular season. Named to the All-SPSL 4A South first team on offense and defense and was Defensive Lineman of the Year. Committed to Portland State.

The rock of a defense that allowed just 64.2 yards rushing per game (2.5 per play) in the regular season, the WSU-bound Pulu was Linebacker of the Year in the SPSL 4A South. He made a team-high 61 tackles in the regular season and helped lead the Eagles to the state playoffs for only the second time since 1976.

There was also some quality video footage of both athletes available. Since they are teammates you can actually see them play together in each others highlights.

Olive Highlights - First Half of 2011