National Signing Day is finally upon us after months of waiting. National Letters of Intent will be signed and sent to Laramie, WY and those lucky athletes will the newest members of the Wyoming Cowboy football team. The coaching staff will officially announce the recruiting class this afternoon but we've put together a break down of the expected commitments.

This truly looks to be the finest recruiting class assembled in Coach Christensen's three years. Simply based on the star system this is also the most talented Wyoming recruiting class in Rivals era. Now stars aren't always the most accurate measure of an athletes true ability but it is an easy way to compare recruiting classes.

We've compiled a spread of the recruits for offense, defense and special teams that shows their stats/ratings plus any links to articles that we posted on Cowboy Altitude earlier. Most of the articles will have video included if we could find it. If there any additions or changes to the recruiting class I will make note of this in the comments section.

Adam Pitter and Brett Smith will battle with Emory Miller to become the starting QB in 2011.  Wyoming also got some nice size speed for the receiving corp with Josh Doctson and Kevin Robertson.  The Pokes also added plenty of depth to the offensive line for the second straight year.  Zach Rushing should compete for a starting job but won't enroll until Fall since he is still completing his Junior College class work.

Pittser was named second MVP at the Elite 11 QB Camp this summer but was in a run heavy offense in high school and wasn't heavily recruited by a lot of larger schools despite being rated as having the 5th strongest arm and 19th ranked duel threat QB in the nation.  Brett Smith is no sleeper despite his two star rating.  He is already enrolled at UW and will participate in spring drills.  He was a three starter in HS and named Oregon Gatorade Player of the Year.

Poke fans will have a great chance to see four of the defensive commitments very early as they've already been on campus for nearly a month.  Korey Jones, Miraldo Michel, Alex Borgs and Mark Nzeocha all enrolled early and will be active for spring practice.  The coaching staff was so excited about Jones that they moved Ghaali Muhammad to RB to help create room for Jones.  Borgs and Nzeocha are both from Germany and will have four years of eligibility.

Eddie Yarbrough was rated as the 6th best recruit from Colorado and the top rated defensive recruit for Wyoming.  He played OLB as a prep but could easily bulk up and make a move up to defensive end.  He is an intense pass rusher that makes his presence known on the field.

The two "lowest" rated commitments according to Rivals are Zach Ewan and Daniel Sullivan but those two are actually the Pokes highest nationally ranked additions.  Ewan was rated as the #2 long snapper in the country and should be a four year starter at Wyoming.  Sullivan has a booming leg and is actually the 7th highest rated kicker.  Signing Sullivan became essential after it was learned Ian Watts had not kept up his academic work and had to leave school. 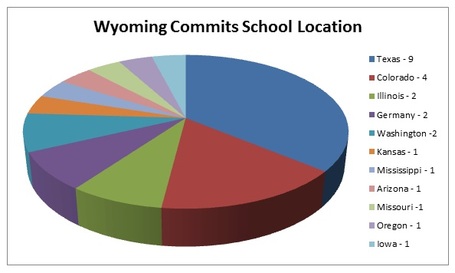 Wyoming really got the heart of the recruiting class from Texas but still  got some solid athletes from neighboring Colorado.  Here is a breakdown of the location of where all the recruits came from.  Miraldo Michel is listed as being from Iowa since went to school there but he is originally from Florida.  Korey Jones is originally from Fort Collins, CO but went to school in Kansas.