Wyoming Officials flew to Virginia to meet with Blaine Taylor

Share All sharing options for: Wyoming Officials flew to Virginia to meet with Blaine Taylor

While Wyoming Officials are keeping their lips tight on the matter we finally have some confirmation of interviews starting.  Luckily information is apparently easier to obtain from sources in the East Coast.  On Monday there was plenty of speculation on a Wyoming jet that would be heading to Virginia on Tuesday.  Wyoming AD Tom Burman denied the trip on Monday and then boarded a CL30 aircraft at 5:45am along UW President Tom Buchanan and Deputy AD Matt Whisenant. 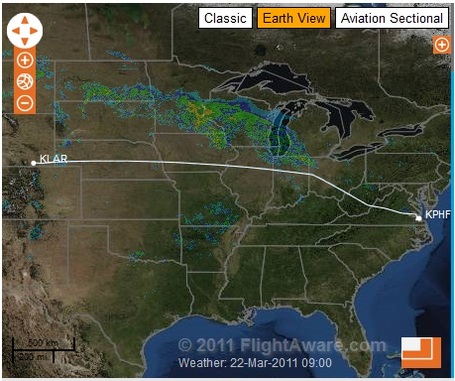 At 10:48am EST the plane landed in Williamsburg, VA where the three gentlmen exited the plane.  The plane didn't take off until 2:07pm.  So what happened during those three hours and 19 minutes? Well we now know that Wyoming officials did indeed meet with Old Dominion coach Blaine Taylor.  Old Dominion is based in Norfolk which very close to Williamsburg.  A native of Montana Taylor has also been linked with the Utah opening.

When the plane landed back in Laramie there a couple of reporters watching to see who who got off and it was the same three officials that started the trip.  Burman gave no comment when asked about his trip or who he met with.  While the Virginia media is reporting that the meeting between Wyoming and Taylor did occur no deal was imminent.

The way this searching is going it seems like Taylor is the flavor of the week but finally there is confirmation of interview occurring.  Last week the hot topic was Billy Kennedy of Murray State and before that Ernie Kent was mentioned as the frontrunner.  If he accepts the position Taylor would be a very solid hire for Wyoming.

He's assembled a 212-110 record at ODU over the last decade and went 141-66 at Montana prior to that.  He has coached five teams to the NCAA tournament and holds a 1-5 record in tournament.  This year the Monarchs were  beaten on a buzzer beater by the Butler Bulldogs in the first round.

In 2008 Taylor signed a contract extension until 2015 that would require a buyout if he left any school except Stanford where was he an assistant before.  Still this may be the right time for Taylor to move back closer to family and start fresh with a new school.  The Monarchs are graduating three starters plus a key backup that accounted for 58% of their offense this year.

On the year Old Dominion finished 27-7 and finished third in the nation in offensive rebound with 15.4 per game and eighth in overall rebounds with 39.9.  On defense ODU led the nation with only 28.1 opponent rebounds and gave up the third lowest points per game at 58.4.