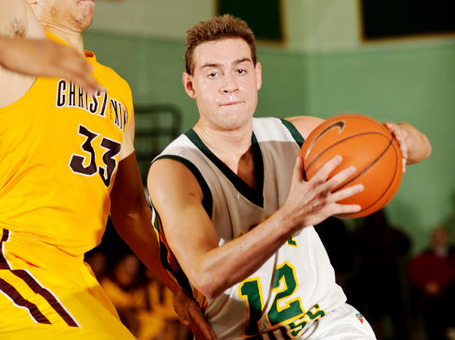 More recruits are heading to Laramie as Coach Shyatt looks to build his 2011 class.  Evan Conti a 6-3 200 pound SG out Holy Cross HS in Flushing, NY will visit on Thursday according to Dylan Butler of the NY Post.  Conti has had a talented career but is still looking for his first D1 offer.  His senior season he averaged 17 points, 10 rebounds and 4.4 assists.

As a sophomore he he was rising up recruiting boards but broke his ankle and missed his junior year.  That is when the calls from other coaches stopped coming.  Last Fall he was set to attend Bucknell but Conti failed to get a qualifying SAT mark for the Patriot League.  Still he could be a real diamond in the rough and he is academically eligible to play  D1 basketball.

"Evan Conti is one of the best kept secrets in New York," recruiting expert Tom Konchalski said. "The fact that he’s not really being recruited is a joke. He rebounds extremely well for a guard. He’s not athletic, but he can really get to the basket. He can shoot the 3, he can get to the basket and he’s a very good finisher around the basket."

The word most often associated with Conti is "throwback" and it’s Conti’s intangibles that make the 6-foot-3 senior so valuable, according to Holy Cross coach Paul Gilvary. He’s just a winner, Gilvary said,

Conti has scored over 1000 points in his career at Holy Cross and has the admiration of coaches from his entire league.  From all descriptions he won't be the biggest, tallest or fastest player on the court but is a hard worker and does everything right on the court.  Could be a great fit for Shyatt who wants players that are "all in" and want to play hard on both sides of the court.

Here is a highlight video of his AAU team when they went to Isreal for a tournament.  Conti scored 27 points in the first half and 36 total.