If you love to read about asphalt and new parking zones then you are in luck!  The University released updated information on the improvement of several parking lots and what you need to do to park there.  The issued a very long press release that you can feel free to read if you choose.

Or you can check out condensed version that is posted after the jump.  We've even included an overhead map so you can see where all these parking lots are located.  You can also find out where you can drink before the games - vital information!

Football season is just around the corner.  Sort of.... 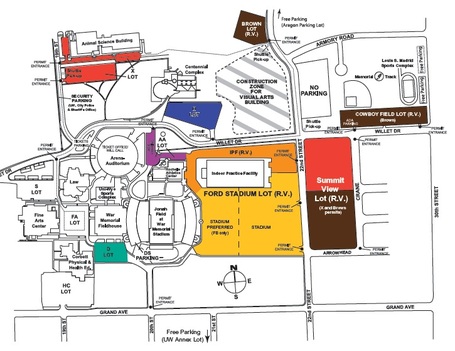 The Ford Stadium Lot, on the east side of War Memorial Stadium, is being paved this summer to provide a higher quality gameday experience for fans. The paving project will be completed by the beginning of the 2011 Wyoming Football season, and will include: 638 total spaces, 74 more than in 2010; sidewalks; lighting; and landscaping.

During the football season, a second shuttle route will pick up fans at the intersection of 22nd Street and Willett, beginning three (3) hours prior to each home football game. It will also pick fans up at the Brown Lot (one block north of War Memorial Stadium) and drop all of those fans off at the southwest corner of War Memorial Stadium near Pepsi Tailgate Park. This shuttle will not run postgame.

During the Cowboy and Cowgirl Basketball seasons, the shuttle service from the Cowboy Field Lot will serve all UW fans parking at Cowboy Field and will also make a stop at the intersection of 22nd Street and Willett Drive to pick up fans.

GET YOUR DRINK ON!

Alcohol-permissible, open-container parking lots will once again be available this coming season for tailgating prior to home football games only. The Ford Stadium Lot and Summit View Lot will both allow open containers for alcoholic beverages. The other designated open-container permissible lots are the AA Lot, Brown Lot, Cowboy Field Lot, H Lot, IPF Lot and X Lot.

Pepsi Tailgate Park will again be located on the southwest corner of War Memorial Stadium. That area is currently under construction due to the paving of the Ford Stadium Lot this summer. But the Pepsi Tailgate Park area will be re-sodded prior to the beginning of the football season.