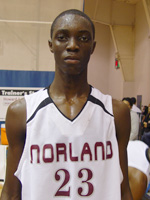 According to Glenn Elrod who writes for the South Caroina Rivals site Wyoming has offered another player out of Florida.  The latest recruit is 2012 SG Cleon Roberts out of Miami's Norland HS.  He also plays AAU ball for the Florida Rams.  Robert is 6-4 185 and one of the top shooting guards in the nation.  ESPN ranks him three stars and the 29th ranked SG in the nation.  Scout and Rivals also agree that is a three star recruit, Rivals has him ranked as the 33rd best SG and 150th overall.

Currently he holds offers from South Carolina and Georgia Southern as well.  After the jump we have a synopsis of what ESPN thought of Roberts back in 2009 as a sophomore.

October, 2009: Cleon is an athletic SG who has an excellent stroke from 3. His ability to knock down the 3 keeps defenders off balance with his ability to make mid-range jump shots and drive to the rim. He has excellent athleticism which allows him to finish plays in the lane, and be very productive in transition. He is an excellent ball handler who can use his ball skills to get to the paint to score and dish to teammates. Just a sophomore, Cleon will continue to add muscle to his long lean frame while maturing as a player. He has a chance to make himself one of the elite players in this class.

Back in 2009 he was 175 pounds and will most likely always have a long and thin frame.  Landing a solid SG is key for this next recruiting class.  No official visit is scheduled yet for Roberts.  The Pokes also offered another Florida guard last week.  The recruit was PG Ian Baker out of Jacksonville who holds offers from Miami (FL), South Carolina and UCF for starters.