Larry Shyatt was hired on March 31st and he completed his first recruiting class in a whirlwind April.  Late on April 29th the Cowboys got their final commitment for their 2011 class when F Larry Nance Jr from Revere HS (OH) announced his decision to head to Wyoming.  This gives the Pokes five new players for the 2011-12 season and addressed all the major needs on the roster.

According to Ohio.com Nance signed his LOI on Saturday.  Wyoming has yet to release an official announcement. 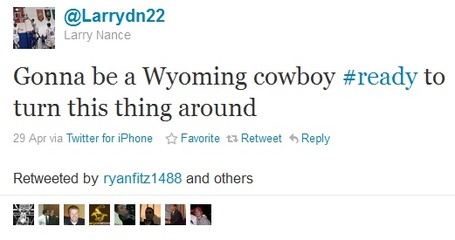 Nance gives Wyoming a talented wing that has a great background and should continue to improve.  He is the son of former NBA All Star Larry Nance who had a 15 year career with the Phoenix Suns and Cleveland Cavaliers.  The younger Nance is currently 6-7 205lbs but could another two or three inches in the next couple of years.  During his senior year he averaged 18.2 pts, 9.5 rebounds, 3 blocks, 2.3 assists and 2.6 steals.

Nance will great fit for the Wyoming program and should see playing time right away.  Afam Muojeke is the only true SF on the roster right now but he is still working his way back from back to back knee surgeries the past two years.  Nance held scholarship offers from plenty of MAC schools including Central Michigan, Toledo, Akron and Kent State. He also had interest from larger programs such as Michigan and Oregon.

The solid recruiting has really gotten fans and the media excited about Wyoming basketball.  Shyatt has shown he can recruit quality players to Wyoming and fans can't wait to see the new players hit the hardwood.   After so many years of negative energy around the basketball program it feels like things are finally different.

The first recruiting class is just the start for Shyatt in rebuilding the program.  Luckily it is off to a great start!