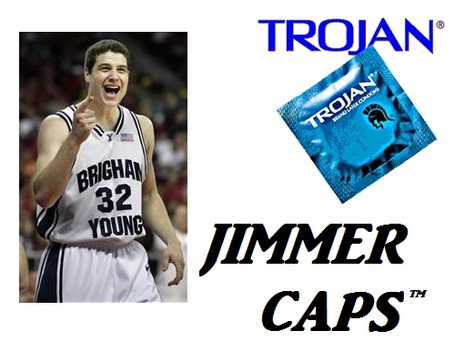 Now that the NCAA basketball season is complete and we are nearing the NBA draft most of the top prospects are signing with agents and even looking at endorsement deals.  Companies across the nation are always looking for fresh talent to pitch their products to consumers. Wholesome Tim Tebow has deals with Jockey and FRS since becoming a Denver Bronco.

Now Jimmer Fredette could be the next young athlete you see pitching you household items on TV.  Fans are amazed by his three point shooting ability and his name is memorable.  Unfortunately one of the best play on words for a new product will never be used for condoms. Now introducing Jimmer Caps, the funnest name for a condom that doesn't sound overly dirty.  These could be a huge moneymaker that will never hit the shelves.  While the Chuch of Latter Day Saints does not ban birth control, they aren't necessarily huge supporters of it either.  So it is highly unlikely you'll ever see the sweet smiling face of Jimmer Freddette on a box of prophylactics.

The NBA draft lottery is now set and the biggest question is do the Utah Jazz blow it and use the third overall pick on Fredette or risk it and hope they can grab him at #12?  Who knows how long his career in the NBA will last but he will certainly make some bank while in the league and pick up a few sponsorship deals as well (Average Joe's Gym?).

Even after he retires Fredette could either move to Utah or his home state of New York and start a car dealership and sell only one vehicle: the newly renamed GMC Jimmer.  If for some reason there actually is a deal with Freddette and condom company in which Jimmer Caps do become a reality then I expect my 10% share.