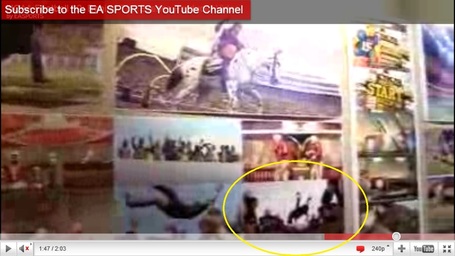 It appears as if the voices of Wyoming fans have finally been heard over by the game developers at EA Sports.  NCAA Football 12 previews are starting to be released and one big aspect of that is more authentic team introductions.  Wyoming Cowboys fans were upset with previous editions due to their team being reduced to the generic entry out of a  tunnel.  The big problem is that there are no tunnels at War Memorial Stadium and the Pokes always enter from the northern gate.

The snapshot above is from a behind the scenes video and at the end shows a wall with several in game screens.  The circled area clearly shows Cowboy players running out in open air and past the iconic statue of Steamboat.  So glad that the Pokes were finally taken care of this latest edition.  I bought NCAA11 and I will certainly be buying NCAA12 and it is important to me that things are accurate.

Honestly all I usually ever play is dynasty mode with Wyoming and turn them into a powerhouse.  If the folks at EA also updated War Memorial Stadium to include the new Wildcatter Suites that would be great.  The other big issue that MUST be fixed is the case of the missing mascot.  Pistol Pete was in earlier versions of NCAA and then he disappeared for some reason.  How dare they take out Pete but leave that wooly bastard CAM the RAM in the game.

EA Sports already looks to have one issued resolved for Wyoming, might as well finish it off and just add Pistol Pete back.  You'll stop getting a lot of less angry emails from Poke fans if you do.  Another big enhancement that will make all fans happy is the chance to create customer conferences of any sizes.  So you can play with the 2012 version of the Mountain West if you prefer. Kick out TCU and then bring in Nevada, Fresno and Hawaii.  You could even add two more teams to create a championship game.

Here is the entire video with the enhancements. The screenshot is taken at the 1:47 mark.