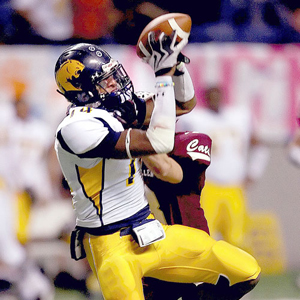 The Cowboy coaching staff is continuing to look for talent in Texas.  The most recent scholarship offer was extended to WR Brian Allen out of La Marque HS in La Marque, TX.  Allen is listed as 6'3 187lbs and Rivals has his 40 time at 4.58 while his highlight video shows him at 4.46.  Wyoming appears to be the first school to make offer to Allen, he is also getting looks from in state schools Texas Tech and Rice.

As a junior he posted 39 catches for 581 yards and five touchdowns.  Looks like he does a great job of bringing the ball down in the air.  He can also hold on to the rock when he knows he is about to take a hit.  His highlight video is posted after the jump as well as an interview with another Wyoming recruit.

Here is a Q&A that TE Zac Veatch from Broken Arrow, OK did with the Tulsa World yesterday.  He is being recruited by nine schools now including Wyoming.