Conferences Based on Geography: Reshaping The WAC

Share All sharing options for: Conferences Based on Geography: Reshaping The WAC

Welcome to second edition of our summer series where we realign the conferences based entirely on geography. If you haven't already please read the introductory post where we explain the concept and how it works. Also you can see what we did for the PAC 12 in our series debut last week. Each week we remake each conference and we heading from west to east.

Currently the Western Athletic Conference or WAC is the most over-expanded and misaligned conference in the NCAA. With borders stretching as far west as Hawaii, north up to Idaho and all the way east to Louisiana. This travel nightmare creates bloated travel budgets for schools and has been a significant factor in the top four programs bolting for the Mountain West.

THE SCHOOLS: Are you ready for some bitter rivalries? This newly formed conference will include some of the biggest and nastiest rivalries west of the Mississippi. The redesigned and beefed up conference has nine members and includes five current PAC 12 schools, two WAC members, one school school from the Mountain West and one independent. The league also covers four states: Washington, Oregon, Idaho and Utah.

Current PAC 12 members need not complain about being moved to the WAC. This an entirely new conference that is much stronger from top to bottom.

No need for any type of divisions with just nine members. This also allows perfectly for an eight game conference schedule. 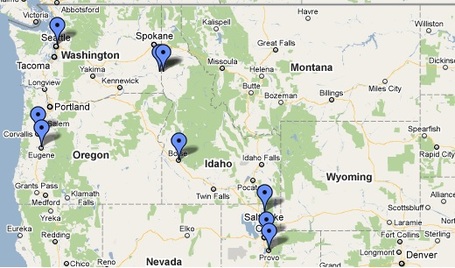 THE DISTANCE: Welcome to a much more travel friendly conference than the old WAC. Not counting Hawaii the old WAC had it's longest stretch from Moscow, ID to Ruston, LA which is a mere 2,236 miles. That would take nearly a day a day a half to complete the drive if you never stopped. Now we've shrunk that distance down to just 884 miles with Seattle to Provo. The shortest distance between schools is just 9.5 miles from Pullman, WA to Moscow, ID. The two cities even share an airport already, how perfect is that?

Washington State and Idaho aren't the only close schools is this conference either. Utah boasts three schools within a two hour drive. Oregon and Oregon State are separated by less than an hour commute. Boise State and Washington are the only schools without a close neighbor. Boise is at least centrally located between all the schools.

BORDERS: No need to add any California, Nevada or Arizona schools here as they were already included in the PAC 12 we constructed last week. Going into Wyoming or Colorado would add an extra 400 plus miles one direction and increase the size of the conference by 50%. Not an efficient use of resources to stretch things out to the Front Range. Stopping in Utah also ensures no travel over the Rocky Mountains which can be difficult in winter.

PLUSES: There would be plenty of great games and rivalries with this new conference. You would already have the Apple Cup, Civil War and Holy War. I like to describe relationship of BYU and Utah as a "feud not a rivalry". It would also keep intact the fight for the Governor's Trophy between Boise State and Idaho. Now can you imagine the intensity of Oregon and Boise State facing off every year? The Broncos beat Oregon back in 2009, can they do it every year? Now we could find out. BYU is strong across the board would have plenty of support on the road. There are plenty of LDS members living all across Idaho, Oregon and Washington.

Oregon State is strong in several sports but baseball is the Beavers true strength. Utah State has built itself up as a basketball powerhouse in WAC but under it's own rules. The Aggies never play a strong a out of conference schedule, especially on the road. Their home atmosphere is incredible and it would be interesting to see how they fare against Washington and Washington State in hoops.

MINUSES: The only real downside to his conference is the fact that some members loath some of their rivals so much. Utah and BYU do not see Utah State as equals and would die if little brother was in the same league as the big boys. Boise State is doing everything it can to get away from Idaho and the Kibbie Dome, this would ruin all that progress.

Washington State, Utah State and Idaho do not have strong football programs. The Vandals have only had some success the last two years. Would Washington State improve if they got to play these two teams instead of USC and the rest of the PAC 12? It would be annoying for me to watch Washington State and BYU play since both teams are the Cougars.

FINAL THOUGHTS: Overall a very solid conference in most regards. Vibrant and strong rivalries and plenty of bad blood between schools. This would give schools like Washington State a chance to prove themselves in football and for Utah State to show what they can do in hoops against stronger programs. This is definetly a conference that I would love to see happen in real life.