Wyoming Cowboy defense has depth and speed to burn

Share All sharing options for: Wyoming Cowboy defense has depth and speed to burn 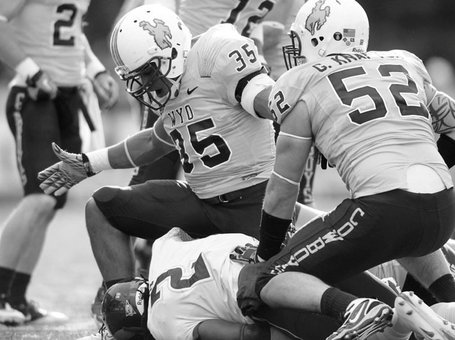 Laramie, Wyo - The Wyoming Cowboy football team has three months left until the 2011 season kicks off.  The Cowboys welcome the Weber State Wildcats to "the War" on September 3rd.  There is excitement in the air in Poke Nation, as the Cowboys continue preparation for next season.

In Coach Dave Christensen’s third season as the head man for Wyoming, the Cowboys will add much needed depth and speed.  The team is loaded with athletes at every position, who should make considerable contributions to the offense, defense, and special teams.

The Wyoming defense will be very fast and equally as deep next season.  Defensive coordinator Marty English will run a defense full of physical athletes, which could be one of the most athletic in the country.

The Cowboys will return all four starters along the defensive line, which I have affectionately dubbed "the Four Horseman".  Defensive ends Gabe Knapton and Josh Biezuns will provide speed to rush passers from the outside, and the tackle tandem of Patrick Mertens and Mike Purcell will anchor the interior.  The d-line will have depth to rotate in at every spot along the defensive front.  Tackle Kurt Taufa’asau sat out last season as a redshirt, and will see considerable playing time backing up Purcell.  Redshirt freshman Riley Lange, redshirt freshman Sonny Puletasi, sophomore Mark Willis, and JuCo transfer Miraldo Michel will also provide valuable depth along the defensive line.

Wyoming will also return four-year starter Tashaun Gipson at corner, who will provide experience to the young Wyoming secondary.  Opposite Gipson at the other corner spot will be sophomore Marqueston Huff.  James Caraway and Darrenn White will provide depth to the secondary as back up corners.  The two starting safeties for Wyoming will be Kenny Browder at free safety, and Luke Ruff at strong safety.  Eric Mitchell will back up Browder at free, while JuCo transfer Luke Anderson will back up Ruff at the strong spot.

The Cowboy linebacking corps will be a strong suit for the team.  The Cowboys will move senior captain Brian Hendricks from middle linebacker, Mike, to the weak outside linebacker, Will, spot.  Sophomore Devyn Harris will move from his strong outside linebacker position, Leo, to Mike.  Harris will back up German linebacker Oliver Schober, who is the starting Mike backer.  After spring ball the starter at the Leo spot has not yet been decided.  The co-starters at this position are German freshman Mark Nzeocha and JuCo transfer Korey Jones.  Providing depth to the corps group will be sophomore Todd Knight and redshirt freshman Austin Woodward at Will, German freshman Alex Borgs at Mike, and sophomore Jeff Roueche at Leo. 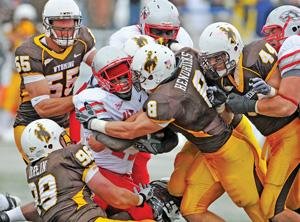 In an interview at the conclusion of spring drills Coach Christensen made this comment about his defense, "Our defense -- I'm really pleased with where they're at. I think we'll probably have 20 kids who will contribute for us in different personnel sets next year on defense. We're as deep as we've been there, and that should allow us to rotate guys a lot and keep our personnel fresh."

With the amount of depth, speed, and athleticism on the defensive side of the ball, this Wyoming Cowboy defense could be one of legend.  Added experience on the defensive front, a strong linebacking corps, and a fast secondary will make the Wyoming defense "Cowboy Tough".