Conferences Based on Geography: The True Mountain West

Share All sharing options for: Conferences Based on Geography: The True Mountain West

Welcome to the third installment of our summer series in which we realign the FBS conferences based on geography. To find out about the concept behind this idea and see our two previous revisions make you check out our summer series landing page. New in this edition is the football helmets that were added for each school for some added visuals.

With this third installment we finally have the entire Western portion of the United States all realigned. Schools are much more spread out in the West which creates difficulties but it turned out out pretty well. The current version of the Mountain West has had massive turnover recently and has been part of countless expansions rumors. It's name has also come under scrutiny because some potential or current members may not have any "mountains" or really be considered part of the "west".

LEAGUE NAME: With this updated version we make sure the league truly lives up to it's namesake. There is plenty of western atmosphere and elevation in this league. There is already a Rocky Mountain Athletic Conference so we can't steal their name. After reviewing everything I would just stick with the name: Mountain West since it describes the conference so accurately.

THE SCHOOLS: This newly shaped league takes schools from five conferences and three states. Four of these schools already play in the current Mountain West and are used to playing each other: Wyoming, Colorado State, Air Force and New Mexico. Now can add in-state rivalries between Colorado/Colorado State and New Mexico/New Mexico State. UTEP and New Mexico State also have strong rivalry with the two schools that are separated by just 50 minutes.

There are two distinct portions of this league with the northern Front Range schools in Colorado and Wyoming. While the southern based schools in New Mexico and Texas schools bring a southwestern essence to the league. 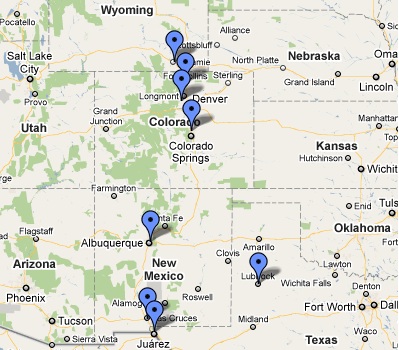 THE DISTANCE: From Laramie, WY to El Paso, TX is 856 miles and is the farthest separation between member schools. Interstate 25 links all of the schools together except for Texas Tech who is further east. As mentioned earlier there is less than an hour drive between UTEP and New Mexico State, while Wyoming and Colorado State are separated by just 75 minutes. Boulder and Fort Collins are also just 73 minutes away.

Currently the longest distance between 2011 Mountain West schools is Boise State and TCU at a whopping 1,604 miles which equates to a 26 hour drive. In 2012 the longest separation will be between San Diego and Laramie at 1,131 miles.

BORDERS: All the schools that are west of Colorado and New Mexico were already used in our previous realignments. Texas Tech is out going to be an outlier in nearly any scenario like this but they fit better in the Mountain West with El Paso then being grouped with the rest of the Texas schools. You'll have to keep reading future editions to find out how the rest of Texas is divided up.

Any of the midwest schools like Nebraska or Kansas/Kansas State are too far east (700+ miles) to be included in this league.

PLUSES: It will be exciting to see if Colorado and Texas Tech can step up and dominate the conference after moving out of larger conferences. They'll finally be able to step out of the shadow of schools like Texas and Oklahoma. Will that freedom allow them to flex their muscles and win some conference titles?

Anytime you have a military academy in your conference it adds another unique factor. Athletes that will be serving their country after college and plenty of tradition. Air Force also brings a strong and consistent football team that could be an annual contender for conference champ. UTEP brings a large market and great support from their fan-base. Tim Miles has Ram basketball on the rise and fighting for an NCAA berth.

MINUSES: Not one but two schools from New Mexico is really going to kill the strength of schedule for football. There is no state worse at football then the Land of Enchantment. At least the Lobos and Aggies bring some decent basketball programs to add some balance. Wyoming has struggled in most sports except women's basketball the last several years. Colorado State has struggled in football since Sonny Lubick left.

UTEP is a school where good coaches who behave badly (Mike Price, Tim Floyd) can always find a home. This has tarnished the image of Miner athletics somewhat. Only eight members means a lot more out of conference games to schedule which can increase travel costs.

FINAL THOUGHTS: This is certainly the weakest of the three conferences that have been formed so far but that doesn't mean it is without charm. All the schools would be use to altitude and playing hard in the thin air. The conference features schools with the top five highest elevations in FBS football and all eight members rank in the top 12.

Not a powerhouse conference but still an entertaining group that has a mix of strong and weak programs. Schools at sea level would dread making a trip to face the thin air of the Mountain West schools.

BTW, Here is a fun quiz you can do to guess the 17 FBS schools with the highest elevation. Can you successfully name all 17? I got all the answers right but it was not easy.