Conferences Based on Geography: The Smaller BIG12 (11)

Share All sharing options for: Conferences Based on Geography: The Smaller BIG12 (11)

Welcome to the fourth installment of our summer series in which we realign the FBS conferences based on geography. To find out about the concept behind this idea and see our three previous revisions make you check out our summer series landing page. We release a new conference each week so feel free to bookmark the site.

Well now that western states are finally completed this is where things can get pretty tricky. The new alignments will be getting more controversial going forward. Starting off with the Midwest we had two options: start from north and work our way down or start in Texas and work our way up. We decided for the first option and started from the the top.

LEAGUE NAME: This conference has changed membership many times over the last century and it's name has reflected it's membership accurately up until recently. It went from the Big 6, to the Big 7 and stood pat at the Big 8 for awhile. Then it bumped up to the Big 12 with addition of schools from Texas. After losing two members they didn't to stick with name Big 12. We want our new conferences to accurately reflect it's membership so we proudly present to you: The Big 11. This is something the Big 10 was never willing to do.

THE SCHOOLS: To construct our newly formed Big 11 we took seven former members of the Big 8, added a couple Big 10 schools, then added dashes of Conference USA and the SEC for some spice. The Heartland is the essence of this conference with schools from Iowa, Nebraska and Kansas. Arkansas, Missouri and Minnesota are included as well. Plenty of "please and thank you's" from the fans while they are tailgating. 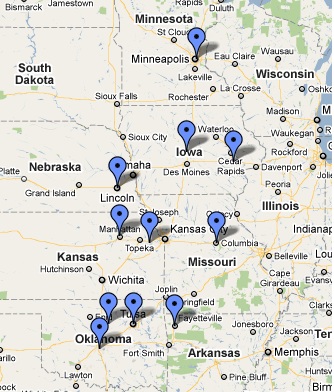 While this league is long it is also very narrow with small distances between the three clusters. The southern cluster: Oklahoma schools and Arkansas are all within four hours. The middle clusters includes: Nebraska, both Kansas schools and Mizzou are within 324 miles of each other. Minnesota and Iowa schools form the northern cluster and are separated by just five hours.

BORDERS: Minnesota is an outlier in any conference based on it's latitude. We did consider adding Minnesota to same conference as Wisconsin but Madison is further away. Since Minnesota and Iowa State are closer so we needed to add them here. The only other school that was strongly considered being added was Arkansas State which is based in Jonesboro, AR. Again that school is much closer to Memphis then Fayetteville so they were not added to this conference. It would have helped to create two divisions but it didn't fit geographically.

PLUSES: This conference is strong in nearly sport out there. Football features powerhouses Oklahoma, Nebraska and Iowa. While Arkansas, Oklahoma State and Missouri also field strong gridiron teams. The Kansas Jayhawks bring one of the top basketball programs in the nation.

There would be a big North/South rivalry and it would be fun to see how Arkansas mixes in with a whole new set of opponents. Finally the battle for the Cy-Hawk trophy would be a conference game and can be easily scheduled. Minnesota brings a quality hockey team to the table.

MINUSES: Having 11 schools would be awkward but at least Bob Stoops would be happy since there wouldn't a championship game. The Big Ten handled having eleven members for a long time so it is definitely possible. Remember the most recent Insight Bowl where Mizzou and Iowa played? Two teams with identical color schemes facing off made for terrible television. Well that would happen constantly now and would be confusing as hell for fans watching on TV and the players.

Tulsa has improved in football over the last several years but it may be hard for them compete in a conference with the Sooners and Cornhuskers. Iowa State would not see much relief even by escaping the Texas schools. Schools from the south would complain if they had to play in Minnesota late in the season.

FINAL THOUGHTS: The well mannered Midwest values conference may be the strongest conference we've formed yet. The only other contender I feel could compete would be the Great Northwestern Conference which includes schools from Oregon, Washington, Idaho and Utah.

This conference did end up larger then I intended. There were smaller options out there but it created a domino effect on all the other conferences. Since we're sticking with the rule that we have to keep the same number of conferences it throws a big snag in the operation. Being able to have 12 or 14 conferences would allow for even smaller conferences but we can't do that.

This new Big 11 produces an interesting twist with several new schools put together that you traditionally never see. Also the it is nice to finally have a league name that is accurate when it comes to membership.