Conferences Based On Geography: The PAC 12

Share All sharing options for: Conferences Based On Geography: The PAC 12

Today we launch the first post in our summer series where we realign the conferences based entirely on geography. To get the full idea of where this idea got started and what guidelines we are using then make sure you read the introductory post. It also breaks down the schedule of when each new conference will be posted.

We are starting the process out on the West Coast with the new PAC 12. Let's see how this new conference stacks up after being reconstructed. We'll use this same format for each post to break down the conference and how we ended up with the final result.

LEAGUE NAME: In 2010 the PAC 10 expanded towards the east in hopes of gaining new television markets and moving to 12 teams. In our scenario we end up with a conference that is still 12 teams and very much keeps it Pacific presence. Not much need for re branding in this scenario so we'll stick with the name: PAC 12.

THE SCHOOLS: So who made the cut for this newly reshaped PAC 12? Several familiar names are included and classic rivalries mixed in with smaller schools that add plenty of history. Pretty much you end up with a mix of current/old WAC schools and current PAC 10 members.

With the twelve school format it does allow for two divisions to be formed to help with scheduling. Hawaii is added to the north since they have long travel times regardless and the north is actually condensed better than the south. So Hawaii could travel less once they reach the continental US. Nearly every school also has a major rival or travel partner included which is a great characteristic of the current PAC 12: UCLA /USC, Stanford/Cal, Arizona/ASU. Now you add Nevada/UNLV and Fresno State/San Diego State. San Jose State and Hawaii have played each other for a long time but unfortunately the Spartans are awful. 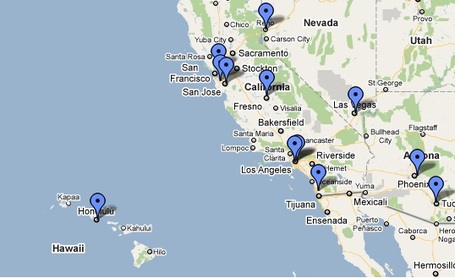 This map was altered to make Hawaii appear much closer. It is nearly impossible to get a decent screen shot that includes the West Coast and Hawaii without having to zoom out a ridiculous amount.

DISTANCE: So obviously adding Hawaii will stretch any conference out drastically. That is one reason why the current WAC has struggled so much with travel costs. If you look at the schools just on the mainland everything is much closer. The schools that are separated the furthest are Nevada and Arizona at just 862 miles. It is a few miles shorter from Tucson to the Bay Area and sits around 830 miles.

BORDERS: Having this conference expand further north into Oregon would have added another 500 miles extra on to a trip to the north. Looking at the Arizona schools it is better for them to be grouped with Vegas and Southern California rather than the New Mexico schools. Going any further north or east would not have been efficient for this conference.

PLUSES: This arrangement would make a league that is strong in nearly collegiate sport. USC and Stanford are powerhouses in football, while Arizona, UNLV and San Diego State have strong basketball programs. Fresno State brings in a great baseball program.

All these locations get a solid amount of sunshine and the PAC 12 would have a strangle hold on their claim to the best beaches and fun with Las Vegas/LA/Hawaii.

MINUSES: The added travel of Hawaii is always a burden for any conference. Having to play San Jose State in most sports is just ridiculous. The league is not split evenly with seven California schools and five from bordering states. That may end up with a power struggle between the Cali based schools and the rest of the league.

FINAL THOUGHTS: Overall this is a really strong and well balanced conference that could be very competitive in nearly every sport. The length of travel involving Hawaii is a necessary evil and this is the closest option for the Warriors. Fans that could afford to travel (remember the price of gas is ridiculous in this scenario) would have some great locations and venues to visit. Fresno may be the one exception to that statement.

Nevada had a strong football season last year but overall have not been strong in athletics. They may be able to stick in the middle of this conference or end up at the bottom with San Jose State. Overall the south division is stronger then the northern six schools.

Please post your thoughts on the layout of this conference and if you would have added or removed any schools. This project is a very fun exercise and really could end up many ways.