Conferences Based on Geography: The Tiny Big 10

Share All sharing options for: Conferences Based on Geography: The Tiny Big 10

Welcome to the sixth installment of our summer series in which we realign the FBS conferences based on geography. To find out about the concept behind this idea and see our five previous revisions make sure you check out our summer series landing page. We release a new conference each week so feel free to bookmark the site so you don't miss any updates.

After working our way down through to Texas and Louisiana we had two choices for the next conference: head east and stay south or start up north again. We opted for the cooler temperatures of the north and the Great Lakes region.

LEAGUE NAME: The current Big 10 has one new member in Nebraska and now has 12 members. Time for the league to have a more appropriate title now. To just try and came up with something new we decided on: The Great Lakes Baker's Dozen. All the states border at least one of the Great Lakes and there are 13 members. It's a mouthful but it does at sound better then the Big 13.

THE SCHOOLS: What we have here is basically several Big 10 and MAC schools combined with one elusive independent. The mighty Irish have finally been tamed and are now full members of this new conference in every sport including football. With thirteen members it was necessary to form two divisions. I was tempted to come up division names because almost anything is better then "Legends and Leaders". The two names that kept sticking in my brain were "Rust Belt and Corn Belt". That is sure to offend fans from nearly every school so I'll let you decide the best division names.

Having thirteen schools does create some scheduling issues but the MAC has worked well with the same number of members for a number of years. 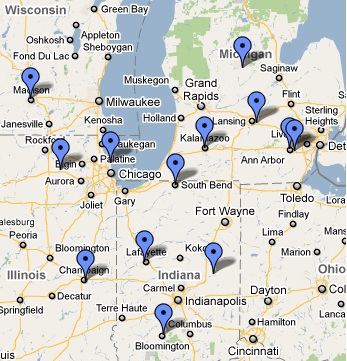 THE DISTANCE: The current Big 10 stretches over 1,000 miles (1,092) to be exact from Nebraska to Penn State. Even before the Huskers joined the border stretched 991 miles from Penn State to Minnesota. We were able to greatly reduce the footprint with our Baker's Dozen.

Obviously having a gigantic lake in the middle of this conference can create some travel issues. Luckily there is a ferry that runs from Milwaukee, WI to Muskegon, MI. Unfortunately it only operates from April - October. That reduces the trips from Madison to Mt. Pleasant, MI home of Central Michigan from 407 miles down to 281 while also avoiding Chicago traffic. All 13 schools fit into a diameter that essentially less than 400 miles. A reduction of 600 miles is a huge savings for travel.

THE BORDERS: Four states are utilized in this new conference: Wisconsin, Illinois, Indiana and Michigan. All the Iowa schools and Minnesota were already put in the Big 12. The tough part here was deciding on whether or not to take any of the Ohio schools. Schools like Cincinnati and Toledo are very close to border of Indiana and Michigan and were strongly considered. Ultimately I decided to not expand this conference into Ohio since there were already more then a dozen schools. You'll have to read future episodes to see where those other programs end up.

Expanding south into Kentucky was an option but Louisville and Kentucky don't fit as well into an entirely northern based league.

PLUSES: Having Notre Dame in any conference is a huge win for the conference itself. The Irish and Badgers are strong in nearly ever spot they compete. The main strength of this conference would definetly be on the gridiron. Having Indiana, Purdue and Notre Dame all together would help build the rivalries in the Hoosier state. Northern Illinois finished 11-3 in football last year, unfortunately Jerry Kill left for Minnesota afterwards. Michigan could have all fives programs battle it for bragging rights.

With two divisions a conference championship game can also be held. I'm saying that it should be held annually in Soldier Field or Lambeau Field. Midwest football deserves to be played outside year round and historic fields make it even more special. Indiana and Northwestern would have a few conference games where they would be favored which helps both programs.

Michigan, Notre Dame and Western Michigan all have strong hockey programs. While Indiana has struggled in basketball recently they do bring nationally ranked swimming and cross country programs.

MINUSES: Ohio State and Michigan being separated will instantly cause plenty of negative reactions toward this realignment. Notre Dame would lose the flexibility with it's scheduling which would make it much harder for the Irish to play USC and Boston College. The MAC is not known as a basketball conference and would have a very hard time trying to compete with the larger schools. All the directional Michigan schools struggled in football last year.

This conference has absolutely no strong baseball programs at all. That is really the only true weakness that can be found across the board. With thirteen members it does create uneven divisions and would cause some difficulty with scheduling

FINAL THOUGHTS: Overall it looks to be a very solid all-around conference here with the exception of baseball. The toughest part here would be having the current Big 10 schools getting used to being in the same conference as the MAC schools. The absence of Ohio State and Iowa would take something away from the conference.

I doubt any conference with 13 members actually adopt the term "Baker's Dozen" into their league name but it was worth a shot. Having the "Gold Domers" finally part of football conference would be exciting but would it take away from their mystique?