Conferences Based on Geography: The Smaller SEC

Share All sharing options for: Conferences Based on Geography: The Smaller SEC

Welcome to the seventh installment of our summer series in which we realign the FBS conferences based on geography. To find out about the concept behind this idea and see our six previous revisions make sure you check out our summer series landing page. We release a new conference each week so feel free to bookmark the site so you don't miss any updates.

Last week we tackled the Great Lakes region and this time we are heading straight back to the heart of the south. This time we are reshaping the most powerful NCAA football conference for at least the last decade. Things will look way different after we are finished with the power structure of football in the south.

LEAGUE NAME: The current name for the Southeast Conference or SEC is a simple yet descriptive name that is almost perfect enough not to mess with. It doesn't deal with any inaccurate numbers related to membership and it describes the region so well.

Since this conference is no longer aligned in the east we will go with a new name: Central Southern Conference or CSC.

THE SCHOOLS: Mix of schools from the SEC, C-USA and the Sun Belt form this new conference. We draw from five states: Mississippi, Alabama, Tennessee, Arkansas and Kentucky. All the FBS schools from Alabama and Tennessee are included along with Ole Miss, Mississippi State, Arkansas State and Western Kentucky.

There is a true southern flavor with these schools and tradition oozes from every direction. There is plenty of heat, humidity and tons of food because tailgating is considered sport to these diehard fans. The west division consists of the Arkansas and Mississippi schools, Memphis and western most Alabama schools. The east combines the remaining Tennessee school schools with Western Kentucky and furthest east Alabama schools.

These divisions work geographically as well as creating some competitive balance, three SEC schools are allotted to each division. 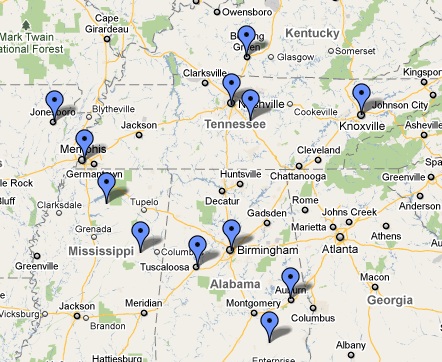 THE DISTANCE: The current SEC is a relatively compact conference with the largest separation of Gainesville, FL to Fayetteville, AR checking in at 991 miles. The two divisions are based on geography with already helps to reduce travel already. In our revision we've shrunk that seperation by more than half: just 471 miles from Knoxville to Oxford, MS. From north to south it just a straight shot of 398 miles down Interstate 65 from Bowling Green, KY to Troy, AL.

The conference is well balanced geographically between the east, west, north and south. Tennessee is the only school that is somewhat of an outpost as it is separated from Nashville by just 198 miles.

THE BORDERS: Western Kentucky was left off the first draft of this conference but after closer examination it ended up being closer to Nashville then the other two Kentucky schools. With our lineup we use a core of three states: Mississippi, Alabama and Tennessee. Then we take nearby schools from bordering states in Arkansas in Kentucky. One school that could have gone to several different conferences was Tennessee which is the farthest east of all the Volunteer State schools. I considered having the Vols join some of the Carolina schools but that was further and would have also involved constant travel across the Smoky Mountains.

Adding the Georgia schools was certainly possible here but with twelve schools already there was no need to push it. It also would have created turmoil with other conferences which you will find out more about next week. Southern Mississippi was already put in to the same conference as the Louisiana schools. Arkansas joined the Oklahoma schools in our revision of the Big 12.

PLUSES: Obviously football will be king here and several key rivalries are kept alive: Iron Bowl, Egg Bowl and the Third Saturday in October. But wait!!! There is more: Don't forget the epic Battle for the Palladium between Troy and Middle Tennessee State, while Memphis and UAB have a historic rivalry that dates all the way back to 1997 in which they compete for a beef carcass in the "Battles of the Bones".

While the Sunbelt hasn't enjoyed great success as a conference the real men of Troy have at least been consistenly the top team. Troy actually has had at least eight wins every year since 2006 which is something that most programs can't say. Memphis brings a very strong basketball program with a championship history to help out the hoops program. Western Kentucky also brings some quality hoops as well as one the of the best mascots in all of college sports.

Tennessee has had success in a number of sports but had issues recently with former coaches like Lane Kiffin and Bruce Pearl. No worries because they still have Pat Summit and the Lady Vols.

Baseball is the likely best sport for the conference as whole. Vanderbilt pops out major leaguer's faster then Octo Mom's celebrity lasted. The Commodores are always in the hunt for national titles, while Mississippi State, Ole Miss, Auburn, Troy, UAB and Western Kentucky ranked in the top 100 last year.

MINUSES: The Sun Belt schools would for the most part be dragging down the level of football in the conference. One positive of that is that Vanderbilt would enjoy a few more conference victories each year as a result. Memphis and Western Kentucky combined for just three wins last year on the gridiron.

None of these schools have hockey programs which a strong indicator of why the Atlanta Thrashers failed so badly and headed north to Winnipeg. With no Florida, Georgia or South Carolina would this conference be anywhere near as entertaining?

Would the big time programs from the SEC ever fully accept their new conference mates from the smaller lower conferences? That has about same chance of an ice cube lasting 10 minutes outside during July in Starkville.

FINAL THOUGHTS: While not as powerful as the modern day SEC it still retains it's southern roots and would certainly compete well with most conferences. Some great rivalries are still included in this conference which is a huge plus. Powerhouse teams in football, basketball and baseball provides excitement throughout the school year. Crazy acts by obsessed fans will provide plenty of entertainment and head scratching during the off-season.

There is always be something happening whether it be good or bad with this conference.