Conferences Based On Geography: The Improved Sun Belt

Share All sharing options for: Conferences Based On Geography: The Improved Sun Belt

Welcome to the eighth installment of our summer series in which we realign the FBS conferences based on geography. To find out about the concept behind this idea and see our seventh previous revisions make sure you check out our summer series landing page. We release a new conference each week so feel free to bookmark the site so you don't miss any updates.

The Sun Belt has typically been one of the worst performing conferences in the FBS. A group of smaller schools spread across the southeastern United States that has been dwarfed by it's bigger neighbors. With this revision it really is an entirely new conference and has very little to do with the old Sun Belt. The "SEC" was redone last week and that is why we are now revamping the Sun Belt. Don't let the name throw you off here.

LEAGUE NAME: We need a new name for this conference since it needs a totally fresh image. In MLB spring training they have two leagues: the Cactus League in Arizona and the Grapefruit League in Florida. That second name keeps coming into my mind since all of the Florida schools are included here. As a result we now present to you: The Big Citrus Conference. There already is a Citrus Bowl, a Peach Bowl and an Orange Bowl. Citrus is a huge crop in that region so the name works for this conference.

THE SCHOOLS: Every conference wants part of the prize that lies in Florida and this conference shows it. Taking members of the SEC, ACC, Big East, Conference USA and Sun Belt. There is a fair amount of balance with three SEC schools and four SEC schools. USF is from the Big East and UCF desperately wants to join them. With seven members from Florida it would certainly be a Florida based conference but the Georgia and South Carolina schools are no slouches and will make they sure are heard at league meetings. 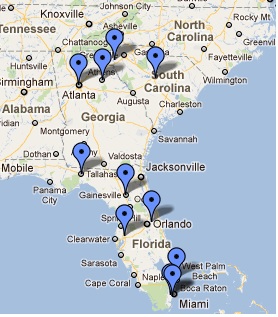 THE DISTANCE: Florida is one of the most deceptively long states in the Union. I once took a road trip from Chicago to a concert that was being held in the Big Cypress National Preserve that is midway between Naples and Miami. It took nearly the same amount of time to drive from Chicago to Atlanta as it did to get from Atlanta to our destination. Long story short here, that is a really long drive and be careful at Phish concerts.

Most people don't realize that the current Sun Belt stretches from Miami to Denver: a mere 2,065 miles. Denver is joining the WAC in 2012 so that is helping all parties involved. With our new version the separation is just 705 miles from Miami to Clemson, SC. That is a very manageable distance and would make travel very a breeze in this conference. The four northern schools are clustered together well so it works for them despite being separated from the Florida schools.

THE BORDERS: This almost could have become a Florida only conference except that there only seven schools in Florida. That forced us to add on in order to reach eight schools which is the minimum required by the NCAA for FBS schools. Therefore we added Georgia and Georgia Tech since they were the closest schools to the Florida schools. The addition of the Georgia schools also meant adding nearby Clemson and South Carolina.

PLUSES: There are plenty of powerful football teams with the major schools from Florida, Georgia and South Carolina. The amount of amazing young talent that exists in all three of these states is incredible. Recruiting could be done entirely in state if needed. Plenty of rivalry games are kept intact with this conference: Battle of the Palmetto State, Clean Old Fashioned Hate, Florida vs Georgia, Miami vs Florida State, and the all important Shula Bowl between Florida International and Florida Atlantic. Hopefully they rename that the Howard Schnellenberger Bowl down the road.

Florida certainly has the best basketball team of the group and the two national championships to prove it. FSU has also had success in hoops. You also get to see Isiah Thomas as a coach for FIU more often. Tell me that wouldn't be must watch television.

From top to bottom baseball is actually the strongest sport for this conference. South Carolina has two recent national titles and even the Sun Belt teams have strong teams on the diamond. This last year Florida, Florida State, South Carolina, Clemson and Georgia Tech were ranked in the top 10. Georgia, Miami and UCF were both in the top 25. Florida Atlantic was ranked the lowest at 55th and that is out of 300 teams. The conference tournament would almost be more exciting then the College World Series.

MINUSES: The smaller schools like Florida Atlantic and Florida International would get killed in football by these larger programs. Perhaps being in a stronger conference may help those programs gain better recruits and make them more competitive. There aren't a lot of glaring weaknesses with this conference. The SEC doesn't have wrestling as a sport, none of the ACC schools in this conference have wrestling programs.

UCF fans seem to drive all of their rivals crazy and think they should already be in the Big East, SEC or ACC. Plus Mike Bianchi would get his way, do we really want that to happen?

FINAL THOUGHTS: Out of state schools would hate this since it would be so much harder to get a recruit from Florida or Georgia and convince those players to go out of state. The College World Series may have to be moved (joke) from Omaha to Atlanta since there are so many strong baseball programs here. Florida's football team really hates to play outside the state of Florida so this would really make them happy.

This could be one the best conferences we've put together and would still have a national following despite it being a regional based conference.