Conferences Based on Geography: The Better CUSA

Share All sharing options for: Conferences Based on Geography: The Better CUSA

Welcome to the fifth installment of our summer series in which we realign the FBS conferences based on geography. To find out about the concept behind this idea and see our four previous revisions make sure you check out our summer series landing page. We release a new conference each week so feel free to bookmark the site so you don't miss any updates.

Last week's edition was our most controversial by far. I expect this latest revision to create plenty of discussion as well. This time we continue our progression down the central United States to improve upon CUSA. We also hit a momentous occasion by finally passing east of the Mississippi.

LEAGUE NAME: The name Conference USA simply will not do any longer for this league. So that is definitely out of the running right away. One name that kept popping into my head was the TexLa Conference for Texas/Louisiana. If you switch it around it is LaTex and that just wouldn't pass. Going with a Texas specific name would most likely offend all the schools from Louisiana. The name I eventually settled on was the Great Southern Conference.

THE SCHOOLS: We took schools from a total of six different conferences to form the first 14 team football league. This project is based on 2011 conference affiliations so in 2012 the league could expand to 16 when Texas State and UT-San Antonio join the FBS ranks. With the new conference anchored in central and eastern Texas we reunite several members of the defunct Southwest Conference: Texas, Texas A&M, TCU, Houston, SMU, Baylor and Rice. LSU is the lone representative of the SEC. Sun Belt members North Texas, Louisiana-Lafayette and Louisiana-Monroe get their shot to play with much bigger schools. Louisiana Tech feels at home instead of playing in the WAC. 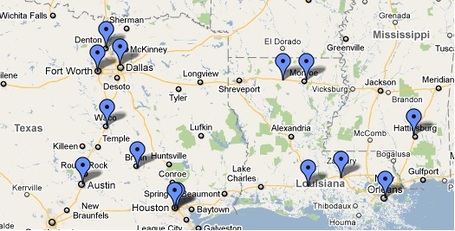 THE DISTANCE: There is quite nice size reduction in this scenario. The current CUSA stretches all the way from Texas to Florida and all the way north to West Virginia. UTEP and UCF are 1,709 miles apart while UTEP and Marshall are barely closer at 1,635 miles away.

The longest separation for our new conference is from Austin to Hattiesburg at a mere 596 miles. All the schools form a circle with no school sitting directly in the middle. All the schools are close to a travel partner school and Houston is the only city to have two schools.

THE BORDERS: Obviously almost all of the schools are based in Texas or Louisiana. The late addition to the conference was Southern Miss which is based in Hattiesburg, MS. That is just 110 miles from Tulane in New Orleans. Mississippi State in Starkville is 187 miles away from Hattiesburg and Tuscaloosa is 181 so it made sense to keep them with the closer school. The fact that it also evened things up at 14 teams didn't hurt at all.

All the Oklahoma schools were taken in our previous revision last week so there was no way to expand further north. The only schools from Texas not included in this conference are Texas Tech and UTEP, both are so far west that they were made members of the Mountain West two weeks ago.

PLUSES: Watching Texas and LSU duke it out on an annual basis would be can't miss television. Having the Southwest Conference partially reassembled would be exciting for fans who loved that league. Giving a school like TCU the opportunity to play against the much larger Texas and Texas A&M annually would be incredible. The two strongest sports would have to be football and baseball by far. Definitely some strong basketball programs but not on the same level.

In 2011 Texas A&M, Texas, TCU and Rice all finished in the Top 25 for baseball at the end of the year. Baylor and Southern Miss also earned votes. Baylor and Texas A&M also bring very strong women's basketball programs to the table. Houston and Louisiana Tech are also on the verge of breaking the Top 25.

MINUSES: Watching any team play UL-Monroe or UL-Lafeyette would be can't watch television. Tulane hasn't had a winning football season since 2002, Rice since 2006 and North Texas since 2004. There are plenty of lower tier teams that would be crushed by school likes Texas and LSU every year.

Adding Texas State and UT-San Antonio in 2012 would only add more schools to the bottom of the barrel. Rice is even worse at basketball then football. Is Tulane good at any sport? Overall the Texas schools are stronger and it could create some problems with divisions. I went with a EAST/WEST separation and split the Houston schools. There be another way to create divisions and even things out more.

FINAL THOUGHTS: Is this new conference all about Texas? Not really since there is nice balance from the Louisiana schools. In regards to football there are three distinct levels with schools like Texas, A&M, LSU and TCU on top. A solid middle with Baylor, Southern Miss, Houston, SMU and Louisiana Tech. The bottom feeders include Rice, North Texas, Tulane and LA-Lafayette and La-Monroe. There could be great battles here as the middle groups tries to knock off a top school. Meanwhile the lower programs would be trying to earn a spot in the middle of the conference.

Having a 14 teams and eventually 16 teams would certainly push the limits. There has been plenty of talk of "super-conferences" being formed and this could be the first one. The WAC 16 only lasted a few years before crumbling. Can that many schools really get along and make it all work?

How long until Texas decides that they don't want to deal with any of this and just go independent? Would love to get your input on any name suggestions you came up with for the conference.