Conferences Based on Geography: The Mighty MAC

Share All sharing options for: Conferences Based on Geography: The Mighty MAC

Welcome to the tenth installment of our summer series in which we realign the FBS conferences based on geography. To find out about the concept behind this idea and see our nine previous revisions make sure you check out our summer series landing page. We release a new conference each week so feel free to bookmark the site so you don't miss any updates.

Welcome to the penultimate edition of our summer series and thanks to everyone for visiting the site this summer. While we have been working on this series more real life scenarios may be playing out over the next couple weeks. If Texas A&M does move to the SEC this could create a domino effect that completely alters the college football landscape. NCAA realignment Armageddon watch is back and in full effect.

Enough reality talk here now, time to get back to this fantasy project that is way more important.

LEAGUE NAME: The Mid American Conference or MAC is still an an appropriate name for this conference. However we decided that we needed to change things up a bit here. Eventually we ended up with a geographically based name: The Ohio River Conference. If you weren't aware the Ohio River forms the border between Kentucky and Ohio and West Virginia and Ohio. Hopefully it doesn't get confused with the Ohio Valley Conference.

THE SCHOOLS: A nice mix of schools were have here: a core of five MAC schools, two Big East members and one representative from the SEC, Big 10 and Conference USA. With this alignment we end up with eleven members which has not been a popular choice in previous revisions. Incredibly eight members come from Ohio, with two from Kentucky and one school representing West Virginia. Marshall is a former member of the MAC and would fit in well with these schools. 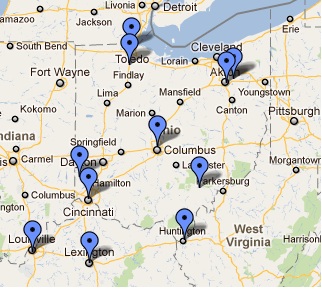 THE DISTANCE: This is now our second smallest conference of this series. With just 344 miles separating Louisville to Kent State it is easy to visit any school. All of the schools are easily connected via the interstate except Ohio University in Athens, OH that is somewhat off the beaten path. Certainly an easy commute for fans from any of these schools. Population density increases in the east and this has allowed us to form much more compact conferences.

THE BORDERS: All the Michigan and Indiana schools were already used earlier in our edition of the Big 10. That prevented us from going further north or west at all. Western Kentucky was actually added to our edition of the SEC. Marshall is much closer to Lexington then it is to Morgantown. The toughest option here was deciding if it was worth adding Pitt and West Virginia to this conference or a different one. Those two are close enough that they have to be paired together. Eventually we decided that sticking with 11 teams was better then over expanding and ending up with 13 schools.

PLUSES: There are several strong basketball and football programs in this conference. Ohio State is the cornerstone of this league and is a perennial power in football and basketball. Despite their recent hiccups with Jim Tressel and free tattoos there is no denying that the Buckeyes are one of the most prolific schools in the NCAA. Louisville may be a stronger member then you realize to this conference. Since 2005 Louisville is one of just two schools to have a team make a BCS Bowl Game, Final Four, Women's Final Four and the College World Series. Kentucky and Cincinnati bring two top basketball programs as well. The Wildcats are truly one of the elite basketball teams in the nation and Rupp Arena is their Taj Mahal.

Finally having Louisville and Kentucky in the same conference is a huge win here. These two in-state rivals are intense and eat, drink and breathe basketball. Having lived in Louisville for two years and with my in-laws still living there, I'm well aware of the depth of this rivalry

You may not realize it but Miami (OH) brings one of the top hockey programs in the nation. The Redhawks were a top 5 team last year. They also had some success in football but lost coach Mike Haywood to Pitt where he was fired shortly afterward.

There are a number of football rivalries that will be kept together with this conference. The Battle of the Bell X 2, The Battle of I-75 and some great trophies like The Keg of Nails (Cincy and Louisville) plus The Wagon Wheel (Kent State and Akron). Also Kentucky and Louisville will finally be in the same conference which has been a long time coming.

MINUSES: Baseball is a huge weakness for this conference besides Louisville. Even the Cardinals have struggled on the diamond recently. The MAC has never been a strong basketball conference and all those schools would end up being fodder for UK, UL, Cincy and Ohio State.

I think Kentucky fans would have the hardest time trying to fit into this conference. UK is so used to playing mostly southern teams as part of the SEC. It would be hard for them to transition to a conference with such a northern presence. Louisville would adjust much easier because of their ties to the Big East and Cincinnati.

Obviously Ohio State and Michigan would not be in the same conference which would upset lots of fans. They could still meet during the non conference schedule so the rivalry isn't necessarily dead. Would anyone really challenge the Buckeyes in football each year? This conference does end up with 11 schools which has not been a popular arrangement in previous versions.

FINAL THOUGHTS: Having Ohio State in any conference will automatically give it a big boost in most sports. The addition of Louisville, Kentucky and Cincinnati add some great basketball programs. The addition of the MAC schools and Marshall add depth to the conference but not necessarily powerhouse programs. The ceiling of this conference is very high and the lower teams are still considered mid tier schools. No real bottom of the barrel schools here.

POST YOUR THOUGHTS AND COMMENTS BELOW. Any schools you would have added or moved to a different conference?