Conferences Based on Geography: The Better Big East

Share All sharing options for: Conferences Based on Geography: The Better Big East

Welcome to the eleventh installment of our summer series in which we realign the FBS conferences based on geography. To find out about the concept behind this idea and see our ten previous revisions make sure you check out our summer series landing page. We release a new conference each week so feel free to bookmark the site so you don't miss any updates.

Well to quote the Grateful Dead... "What a long strange trip it's been......." We've now gone from coast to coast and this is the final conference revision that needs to be done. If you've been reading the previous editions and have ever FBS school memorized then you should know who will be in this conference based on process of elimination.

Don't become distraught because this series is ending because lucky for you we will have a bonus article that goes up next week. In that piece we will do a recap of the series and give some insight into what we learned as well as post the results of the NCAA 12 simulation based on these conferences.

LEAGUE NAME: The Big East was one more of the more geographically appropriate conferences until last fall when they decided that TCU would fit as a member of this northeast based conference. Those kind of shenanigans don't fly in our scenarios. This conference needs that truly reflects it's nature and so we decided on: The Wicked Nor'easter Conference. The presenting sponsor of all conference events is Samuel Adams Beeeeer.

I'm sure the NCAA would have no problem with a beer company being a title sponsor.

THE SCHOOLS: Half of the league members are current members of the Big East. Then we add a mash of Conference USA, ACC, Big 10, MAC and an independent to complete the crew. Boston College is a former member of the Big East so there is also some added history/rivalry there by bringing the Eagles back.

We're not doing the separate basketball members of this conference. As we've done before this is a FBS football only conference. 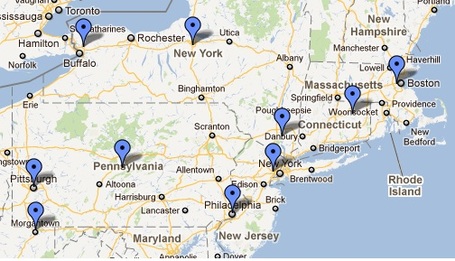 THE DISTANCE: Compared to our most recent conferences this one is much larger. The largest separation is from Morgantown, WV to Boston which is 593 miles. While it is a larger conference the good news here is that the league is very balanced geographically. There aren't really any major geographical outliers here which reduces the distance driving between schools.

THE BORDERS: The heart of this conference is the northeastern United States. Schools are in West Virginia, Pennsylvania, New Jersey, New York, Connecticut and Massachusetts. Maryland and Navy were included in our ACC edition. Marshall and the Ohio schools all went to the MAC that we did last week. Plus there were only 10 schools left that hadn't been put into one of our previous conferences.

PLUSES: In regards to football this conference has a nice upgrade thanks to the big edition of Penn State and the eternal youth of Joe Paterno. This conference may not filled with multiple powerhouses but there are plenty of very strong football programs. West Virginia, Pitt and Boston College are all solid programs that could contend for a conference title each year. Men's basketball is very strong with UConn, Syracuse, Pitt and Temple all bringing quality programs that are national championship contenders. The UConn women's basketball program is a true dynasty.

BC also brings a hockey powerhouse to the table which is a big boost. In lacrosse Syracause brings an elite level program while Army and Penn State boast decent teams. Having any of the Military Academies in your conference adds a great amount of history and tradition. Penn State is the only school to have a strong wrestling program.

Football rivalries that would be kept alive in conference play include: Backyard Brawl, Battle for the Schwartzwalder Trophy, and Pitt - Penn State. Excellent that the Panthers and Nittany Lions can finally face each other as conference foes.

The fall foliage would be delightful as your road trip across New England and upstate New York.

MINUSES: It is kind of amazing that none of these other schools besides BC have a strong hockey program. UConn and Army are the only other schools with hockey programs and neither are very good. How does Buffalo not have a hockey program? That city is already frozen in ice half of the year. The Bulls also bring the weakest football program of this conference. Even though they love the Sox, Yankees and Phillies in these cities none of these schools field a baseball team that is worth a jock strap.

Army football has improved recently but they have struggled most of the decade. In most other sports the Black Knights aren't very competitive.

FINAL THOUGHTS: This is certainly a very strong football and basketball conference with a number of schools that could win each year. The state of Pennsylvania finally has all their schools united in one conference and Boston College is back in the Big East. I also was able to work the word "Wicked" into a conference name which is a definite first. More conferences should throw in adjectives in their titles.

There wasn't as much drama with this conference due to process of elimination but I think it turned out pretty well. Don't forget to check out our final post next week where we do a quick recap and included a few other surprises.

Post your thoughts and comments below! Any strengths or weaknesses of this conference that missed?