Conferences Based On Geography: The Compact ACC

Share All sharing options for: Conferences Based On Geography: The Compact ACC

Welcome to the ninth installment of our summer series in which we realign the FBS conferences based on geography. To find out about the concept behind this idea and see our eight previous revisions make sure you check out our summer series landing page. We release a new conference each week so feel free to bookmark the site so you don't miss any updates.

THE SCHOOLS: The current ACC is fairly well aligned but the crazy thing is figuring out the divisions where some how Boston College and Florida State are in the same division. There are only nine members in our revision so there wasn't even the need for divisions to be created. The heart of conference is seven members of the ACC along with the addition of ECU from Conference USA and independent Navy.

The northern and southern outliers from ACC are no longer apart of the conference. This creates a balance of the five Carolina schools that are nicely grouped and then the northern pairs of the Virginia schools and Maryland/Navy. These are also some of the oldest schools in the United States and bring plenty of history with them. Navy adds even more tradition to this conference. 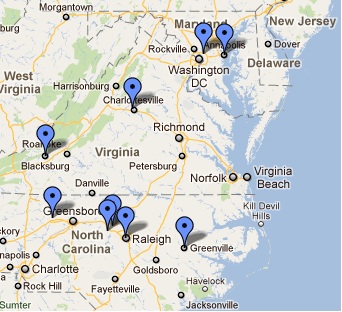 THE DISTANCE: We have a new record for most compact conference! The previous leader was the revision of the SEC that had a diameter of 471 miles. The ACC smashes that now with a mere 308 miles which separates Blacksburg, VA from Annapolis, MD. That is less than a five and a half hour drive which means schools and fans can quickly and easily travel to any road game.

The current ACC stretches all the way from Boston to Miami which is a tiring 1,490 miles. So we chopped a whopping a 1,182 miles off this conference. Prior to 2004 the ACC was fairly well aligned conference until Miami joined and then Boston College followed in 2005.

THE BORDERS: Our smaller ACC consists of all the schools from North Carolina, Virginia and Maryland. All the schools further south were already put into new conferences and were unavailable. The only question mark here really was whether or not to expand north into Pennsylvania or westward to West Virginia.

Ultimately it was decided the schools in those states fit better in separate conferences so we stayed at nine members. Dividing up the teams is the east is by definitely tougher then the west coast schools. The population is much denser and so are the schools which makes it harder to divide schools.

PLUSES: Basketball is ultimately the heart and soul off the Atlantic Coast Conference and we keep it that way. UNC has five national championships, Duke with four, NC State has a pair of titles and Maryland won it all in 2002. Keeping these conference rivalries is huge and it is must watch TV across the country when the Tar heels and Blue Devils square off. There are plenty of other sports where this conference is competitive.

In baseball Virginia and North Carolina both made the College Word Series this past season. Field Hockey is also where a huge strength lies: Maryland, Wake Forest and UNC have combined to win 16 of 30 national championships. Crazy that just three schools have more then 50% of a sports titles. Virginia and Duke took the last two national titles in Lacrosse. Lax is very strong with most of these schools. Soccer is also strong for both genders: on the men's side Maryland, Virginia and Wake Forest have all won national titles in the last six years. Meanwhile the UNC women have won a whopping 20 of 27 national titles.

In regards to football Virginia Tech is by far the strongest program in the conference. The Hokies are annually a Top 25 program and do well as long as they aren't playing James Madison. The newcomers East Carolina and Navy provide much needed depth to this conference and have provided at least eight wins a season over the last five years. Plenty of rivalries are kept intact as well: Commonwealth Cup, Crab Bowl Cup, South's Oldest Rivalry, UNC/NC State and Maryland/Virgina.

MINUSES: There a certainly several weaknesses with this conference but it comes down more to individual programs. Duke football is good for a surprise win every couple years but other then that they are fairly useless on the gridiron. UNC football had things going in the right direction til Butch Davis let the program get out of control and things and now the team is in turmoil.

East Carolina is the one school from North Carolina that has somehow failed to become good at basketball. Getting mauled annually by Duke, UNC, Wake Forest and Maryland probably won't help much. Navy is strong in football but like the other service academies they struggle in most other sports.

FINAL THOUGHTS: Well not a football powerhouse this conference is deep and has several quality programs. It's dominance in other sports such as basketball, lacrosse, soccer and field hockey certainly make a contender for best overall conference. In essence we kept the ACC what is supposed to be: a strong basketball conference with deep rivalries and plenty of tradition.

In writing this article this biggest thing I learned was how dominant UNC has been in several sports besides basketball. Still not a fan of Carolina Blue but that is just me.