For those of you that don't know I live in northwest Washington very close to the Canadian Border.  It is actually closer for me to drive to Vancouver, BC then to Seattle.  Even though I've lived here since 2005 I've never gone up to Canada for a sporting event.  I usually go to Seattle to watch the Seahawks, Mariners or Sounders.  I decided It was time for that to finally change that this year.  Two weekends ago my brother was visiting and he had always wanted to see a Canadian Football League game in person as well.

It worked out that the BC Lions were home this weekend and hosting the Winnipeg Blue Bombers.  I convinced my friend Corey to join us, we purchased some tickets online and the three of us headed up north.  The drive was supposed to take an hour and a half and we left three hours in advance.  We got through the border in about 20 minutes and things were looking good.  Once got on Highway 1 that is when we ran into some problems.  They've been doing construction on that highway for months as they expand it south of the Port Mann Bridge.  We spent a good hour stuck in super slow traffic until we finally crossed the bridge.

After finding an illegal parking spot on a nearby residential street and facing the threat of being ticketed we started walking towards the stadium.  First we stopped at a gas station to use an ATM before actually heading towards Empire Field.  There was a large crowd of fans trying to entire the stadium and there was an over powering smell of pot as we got closer.  Apparently Canadian Football is much more enjoyable when stoned. 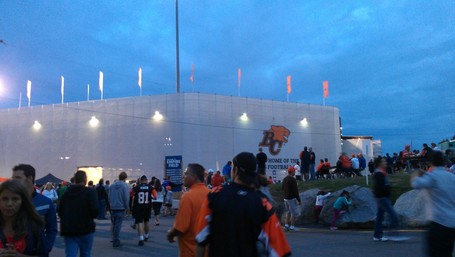 The BC Lions usually play all their games at the domed BC Place which is located in downtown Vancouver.  However this summer it has been undergoing renovations as they make the roof retractable.  So the Lions and Whitecaps of the MLS have been using Empire Field which is based in northern Vancouver next door to PNE Amusement Park.  So basically Empire Field is a temporary stadium that has exterior made entirely of scaffolding.  The seating on the sidelines is individual seating and bleachers are in the endzones.  So once BC Place is complete this venue will be torn down and just be a parking lot for the Amusement park.

All concessions and restrooms were outside the stadium.  All the bathrooms were mobile units that can be easily removed.  There was mix of port-a-potties and what seemed to be FEMA type mobile bathrooms surrounding the field.

Our seats were nearly on the goal line and apparently we were in the Winnipeg fan section.  The Blue Bombers uniforms are identical to the St Louis Rams color scheme.  You could wear a Winnipeg jersey to a Rams game and most fans wouldn't notice.  The Lions go with a orange and black color combo that is closest to Oklahoma State. 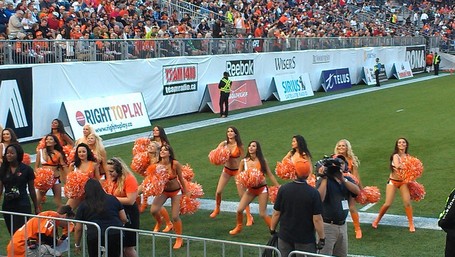 A great perk of our seats was that that we were close to the cheering section for the Lions cheerleaders the Felions. I won't go into great detail on why they were so entertaining but the knee high orange gogo boots didn't hurt things at all.

The Game:  So if you aren't familiar with the different rules in CFL here is a quick breakdown.  In the CFL teams only have three downs and the field is also an extra 10 yards longer.  The end zones are twenty yards deep and the goal posts are at the front of the end zone.  There also 12 players on each team instead of 11.  The line of scrimmage is one yard wide which makes it easier to go for it one 3rd and one.

There is also few differences in the kicking game that can make things interesting.  Read this if you want to see all the differences and then check out this crazy play kick play involving multiple kicks on one play.

Most of the players had played collegiality in the United States and there was mixture of players from BCS schools, Non AQ and FCS schools.  The game was fun to watch except that BC was terrible once we got there midway through the first quarter..  The Lions had four fumbles and one interception and ending up losing 30-17.  The hardest thing for me was to watch teams punt on third down throughout the game.  Winnipeg was definitely the better team and there is a reason they are now 6-1 while BC is 2-6.

The crowd was announced at 24,131 and  was certainly into the game.  When we left the game there was more pot haze coming from the crowd.  No one ran into the goalpost which was very disappointing to all of us.

Concessions:  Enjoying food at any sporting event is always a good thing.  When in a foreign land it is a must!  My brother refuses to enjoy any live sporting event without alcohol in his system so we hit up the beer tent before finding our seats.  We were disappointed that the only two brands they were selling were Budweiser and Stella.  Are you kidding me?  Where is the Molson or LaBlatt Blue at a Canadian sporting event?  I opted for the Stella since it was more foreign then the Budweiser.

At halftime we drained the snake and then decided to get some vittles.  All the food was in a grab-and-go line that was very efficient.  You just walk through and grab each item that is already prewrapped and then you pay at the end.  This female Winnipeg fan convinced by brother that we needed to try almost every item on the menu.  So we ended up with several Mozzarella Smokies, a PNE Burger and a BC Dog.  The smokies were the best, essentially they were a smoked sausage with chunks of melted mozzarella inside.  Impressive Canadian sausage technology that is better then a cheddar bratwurst.  The PNE Burger had a secret sauce that was deemed to be Thousand Island dressing and my brother liked it enough to not give me a bite.  The BC Dog had bacon and cheese underneath the dog but the cheese wasn't melted and wasn't great.   I would definitely go back simply for a mozzarella smokie again.  There was no poutine to be found which was very disappointing.  Corey got some fries that were subpar. 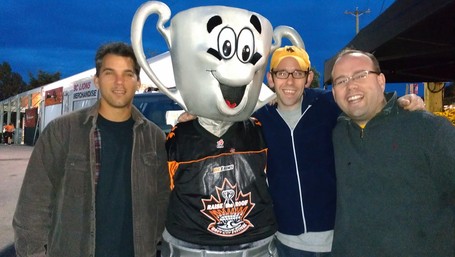 So we got our picture taken with a celebrity trophy mascot.  Corey is on the left, I'm sporting the Wyoming hat and my brother is on the far right.  Sorry to disappoint those who expected me to weigh 300 pounds simply because I'm a blogger.

Once we checked out the team store it was easy to tell that we were in Canada.  Since they are hosting the Grey Cup you commemorate that with a football jersey, right?  Wrong, of course it must be a hockey jersey (pictured below).  Any excuse to wear a hockey jersey is a completely acceptable practice in Canada.  My brother got a orange Lions shirt and I ended up not finding anything worth buying since my wife would have been mad if I bought a Felions calender. 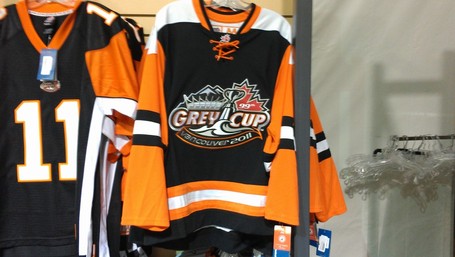 My first CFL game was certainly a great time and definitely worth doing again.  You may have watched the CFL this summer on the NFL network but it certainly does not do it justice.  I plan on attending more games in the future and seeing the renovations at BC Place.  My brother has added "visit every CFL stadium" to his sports bucket list which is always expanding.  The only bad thing that happened during the game is that I was nailed in the face with a beach ball by a Winnipeg fan three rows below us.  I believe that is a hate crime since I'm an American.  The fans behind us heckled and told him to buy me a beer but he never coughed up the eight bucks for a brew.  I recovered from the beach ball attack and there were no further incidents.

One final picture for you,  the Felions got cold in the second half and put on some jackets. 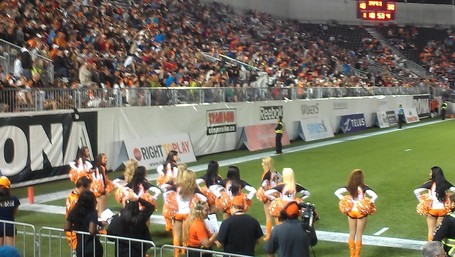