Welcome to Public Image Enhancement 101 hosted by Cowboy Altitude. The goal of this class it to take sports figures and use our specially trained artistic skills to give them a whole new image. We literally spent minutes using the most powerful graphic design program in the world MS Paint to render these pictures.

Our subject today is Dave Christensen head football coach for the University of Wyoming. Heading into his third year coach Christensen is well known among Mountain West fans but most college football fans wouldn't be able to identify him. That is where we come in: image enhancement and increasing awareness.

Some coaches are known for articles of clothing they wear, off the wall quotes, epic meltdowns or legal action. Coach Christensen has not qualified in any of these categories and that needs to change. Mike Leach was known for "Fat Little Girlfriends" and Mike Gundy has "I'm a Man. I'm 40". With the press Christensen is known for being even tempered and fairly reserved. You're not likely to catch him spouting off an quote like Leach or Gundy. So we're not going to go that route.

Mike Locksley is known for two things losing a lot and being sued by former coaches due to alleged violence. I'd say the the average college football fan can name the head of New Mexico easier then head coach of Wyoming due the losing and lawsuits. We don't want Christensen to have either one of those negatives associated with him.

So we ended up deciding that a new look and fresh wardrobe would the best options for Coach Christensen.

Without further ado we give you our suggestions!

Jim Tressel is better know as the "Vest" and Bill Belichick goes by "Hoody".

We proudly present to you: "The Poncho" a free form clothing item that keeps the arms free for angry gesturing at referees and also helps to hide any weight gain that may have happened. They come in a variety of colors and patterns so he could go with one particular poncho or mix it up every game. We went with a colorful poncho for our rendering that really catches the eye and is flattering to his figure with the horizontal stripes.

If someone is flipping through channels and catches a coach wearing one of these bad boys you know they are going to stay and watch the game. Boom! Instant TV ratings increase! 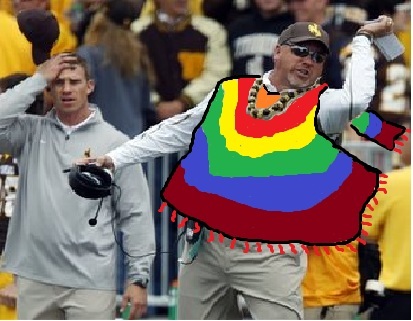 Since the mascot for Wyoming is the Cowboys we though it would be smart to have some team themed accessroeis. That was the inspiration for our next suggestion wearing "Cowboy Boots". We also included spurs since no really wears them just walking around and it would create quite a scene when they accidentally cut a communication wire or were used to attack an unlucky Gatorade cooler. 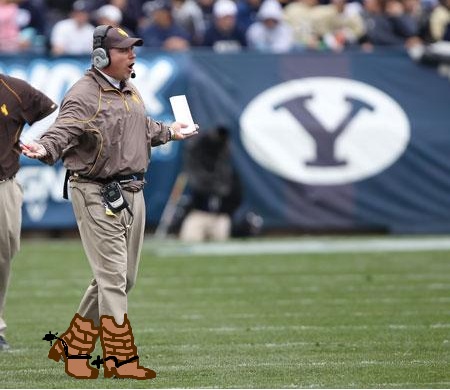 "Where would you like me to put my boot?

Keeping with Cowboy theme here we decided it we good to try some different head wear. Christensen has worn a baseball style cap, a visor for a games a straw hat for practices. This time he needs ramp things up and go with a big old 10 Gallon Cowboy Hat. We may not be the best hat drawers in the world but we gave it our best shot. The actual hat may be even larger then this one shown. It would have to be measured so his head gear would fit properly underneath. 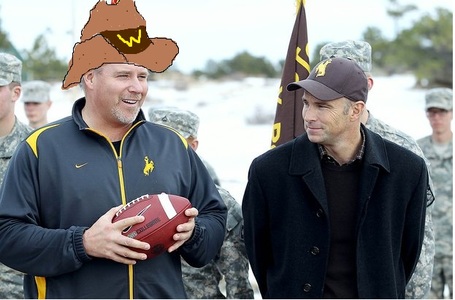 Instead of going with a wardrobe change here we would opted for some facial hair for our final change. He already sports a goatee that is a mix or grey and white. We suggest he grow out the mustache and dye it pitch black for an bad ass "Handlebar Mustache". With the combination of mirrored sunglasses and mustache he certainly moves up the bad ass scale several notches. 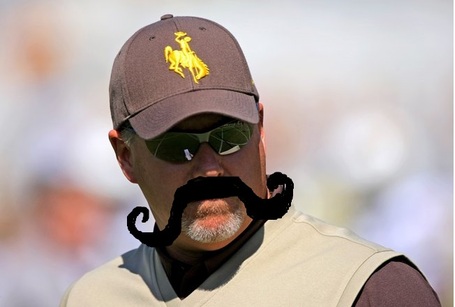 "The mustache makes the man"

With one or more of these suggestions Coach Christensen and Wyoming is certain to get a lot more publicity. Any other suggestions on what he could wear besides these four items? Post them in the comments.