The Wyoming recruiting news has been hot and heavy the last week. Coach Christensen and his staff have certainly been busting their tail so far in 2012. Two more recruits just verbally committed to make it nine total in the last three days. If things keep up at this pace then the 2012 recruiting class may be filled by the weekend.

The first commit we'll look at is Adrian McDonald from Eisenhower HS in Lawton, OK. That is the same city as current Cowboy DE Sonny Puletasi but McDonald went to a different high school. Wyoming offered him all the way back in July and six months later it looks like he'll end up a Cowboy. McDonald is listed as 5-10 160lbs and played quarterback in high school. Rivals has him listed as an athlete with a three star rating. I originally saw him playing receiver for the Cowboys but it turns out he'll actually play in the secondary. He chose Wyoming over offers from Louisiana Tech, North Texas and New Mexico.

McDonald visited Laramie in December and it's character appealed to him.

McDonald, who visited Wyoming early last month, said the small town of Laramie, Wyo., which steers some recruits away, was an attractive option to him. Because of the college-town environment, McDonald is hoping that focusing on school and football will be easier to do. 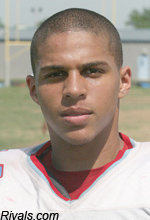 The second commit wasn't on my radar as a target of Wyoming but he certainly looks like a great find.

LB Siaosi Hala'api'api easily wins the contest for best name and hair in the 2012 recruiting class. Listed at 6-1 220lbs from Kaimuki HS in Honolulu, HI, he has great size for a high school linebacker. His school played a 4-2-5 and he looks to have some solid speed and does well in pass coverage so he may able to play outside or middle linebacker.

Right now Rivals doesn't have him listed in their database. Scout has him listed as an outside linebacker but no rating yet. Also big props to Siaosi for using the Terminator clip at the start of his highlight film. Coach Christensen was actually in Hawaii today. Perhaps he just was meeting with Siaosi; or is there another recruit from the islands that he is after? We'll just have to wait and find out. Coach Tormey recruits Hawaii and certainly has a number of contacts in the area. Having Hawaii join the Mountain West probably didn't recruit either. Even the Cowboys and Warriors are set to play till 2014. That may change with Boise and San Diego State leaving in 2013.

Check out the highlights of the last commits!