Share All sharing options for: Panel Of Pokes: Border War And Halloween Costumes

First we'll take a look at the updated standings in the Pick Em Contest.

We have a three way tie for the top spot. I was surprised myself in fourth place since I messed up and forgot to place my picks in time for the Nevada-Air Force game. Only one player correctly guessed all five games. Congrats to "John".

Anyone think it would be great to see one side of War Memorial hold up giant cards that form remember the 2010 Border War beat down? 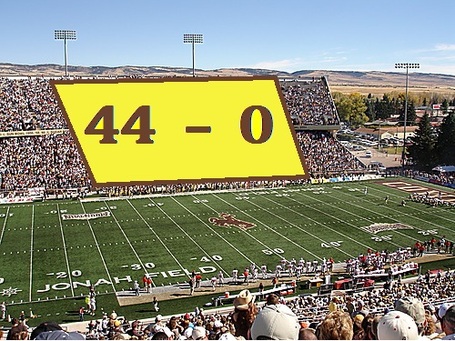 Back in June I predicted that Wyoming would run away with this game and win 34-12, I am going to stick with that prediction. Head coach Dave Christensen is going to be fired up after having to be away for a week due to his suspension. This week if all players do not play to the best of their ability then old DC may have their head on a Brown and Gold Platter.DC will have the play book open so look for the offense to be hitting on all cylinders. It is a bad week to be a Ram and a great week to be a Poke. The best thing to happen this season to the Pokes was the suspension of Christensen as now he will be fired up and that will resonate through the whole team and that is why I am going out on a limb and making the head coach my Poke Pick.

Favorite Halloween Costume: Maybe I am just to old to remember, because I do not have one.

Favorite Halloween Costume: Probably Superman or Batman, or Star Wars. From a perspective of a young kid, any costume of a super hero or the Star Wars era with the popular action figures were cool to wear or see friends with it on during Holloween. Who's going to be the Cowboys' Superman this weekend?

Poke Pick: My pick for this week is going to be Brett Smith. Big players step up in big games and this is a big game for both schools. This is Brett Smith's time to shine and bring home a 4th boot in a row to Laramie. The boot seems to have a nice home in Laramie, as it's been there for three consecutive years. Smith is due for a big game here and there's no time like this weekend to keep the streak alive. If the Pokes win this weekend that will mean the seniors will go out never having lost to the sheep. That's a nice streak and hasn't happened since the 60's for the Cowboys. A win over the sheep would definitely give the Pokes a boost going into the final few games of the season.

Score Prediction: The Cowboys are finally favored in a football game this season. That's good news for the Pokes. The last time the Pokes played the sheep at home they won 44-0 behind a few Alvester Alexander touchdowns. The team has changed quite a bit since then, but I would love to see a similar result. The Pokes are due for a blowout victory and who better to beat on than the state college to the South. I'm going to go with the Pokes here, and the boot stays in Laramie. Pokes 38, sheep 13.

Instead of rambling on about Cowboy football Matt wants to change things up and talk about Halloween. I'm just going to throw out that I'm not a big fan of Halloween, as I stopped dressing up for the holiday before I was 10 years old.. I was an adult much faster than I should have been. I had a number of Halloween costumes (that I can remember).. everything from a Care Bear (shut up, they were popular!) to a GI Joe to a Washington Redskin football player, as well as a Dallas Cowboy player to Batman and a Ninja Turtle. The costume I remember most is when Mom put me in a hound dog costume.. It was a brown and black one piece suit with a dog mask.. the mask looked like one of those goofy people that go to Cleveland Browns games (minus the cigar sticking out of the mask's mouth). The only reason I remember this costume (aside from the mask being god-awful hot) is because the costume had a tail and Mom had taken us kids downtown Thermopolis to do some trick-or-treating and when I got in the car apparently my tail had gotten shut in the car door. So for the drive four miles to home I couldn't move because my damn tail was in the car door. I don't particularly remember this costume because it was cool but because my Mom brings it up at least once a year, usually in situations that may or may not embarrass me. Anyways, my favorite costume was probably the Ninja Turtle costume or the Batman costume. Those don't seem to be quite as memorable though except I looked like a bad ass in those costumes.

The senior from Fort Collins has plenty riding on this game. As a senior captain he'll do everything he can to stop the Rams and hold the Bronze Boot one more time.

Score: I've been down on the Pokes recently but that changes this week. This will be close like last year but the Pokes will still pull it out 27-23. Anything and everything can happen in the Border War.

Halloween Costume: I never had any great Halloween costumes. The one I wore the most was my Chicago Bears uniform. It came with a helmet and jersey and I wore it a ton while playing football and for at least three times trick or treating. My worst costume was a yellow Care Bear outfit that my mom made. She put a lot of effort into it but it was super warm and I looked ridiculous.