Fanthropology: Getting To Know WYO1016

Share All sharing options for: Fanthropology: Getting To Know WYO1016

A couple weeks ago we asked Wyoming fans to tell us about their love for the Cowboys. There were several great entries but one stood out: WYO1016.

We asked him a couple questions to get a better feel for his love of the Cowboys.

What was one memory that stands out as being a member of Western Thunder? Is there anything special the band would do before or after games?

WYO1016: Being part of the marching band was the best decision I made going into college. My memories from my time in the band were some of my best ever. Before the games we would always march over to tailgate park and play a round of Ragtime Cowboy Joe and the Fight Song, then head over to the stadium to prep for the game. During marchovers each section had certain acts they would do to break up the monotony. They're kind of hard to describe, but if you ever see the band marching pay attention, it's pretty entertaining.

One specific game I can remember was the New Mexico game my sophomore year. It was the only time I have ever seen the band not play. It was so cold that one of our sousaphone players' lips froze to his mouthpiece! Our director decided that we should probably just not play that game after that, but we did go sit in our regular spot and wear our overcoats to cheer on the team.
Another good memory was during our annual two week band camp (yes, those do exist) before my junior year. Joe Glenn had just been hired, and he came over to let us know how much he loved the band. After he gave his speech he sheepishly asked our director if he could "maybe direct a little bit of Cowboy Joe?" He had a huge smile on his face the whole time, and knew every note by heart. Joe was a great ambassador for the football team and the university.

He mentioned sousaphone and it reminded me of this video.

How long did each of your tattoos take? Would you consider any additional Wyoming ink in the future?

WYO1016: The one on my left arm (Steamboat & fire) I got my freshman year of college. I had to drive down to Cheyenne to get it done, as there were no tattoo shops in Laramie at the time (that I knew of). I had to go down a couple of times to get it finished. I'm pretty pale, and the artist said that he was having problems seeing where the red ink was going towards the end of the first sitting. The first sitting on that one was about an hour, maybe a little over. When I got it finished it was around another hour or so. It's down around my bicep, so I've got lots of room above it. I'm thinking of some sort of Wyoming based shoulder cap to go up the rest of the arm, but I haven't figured out what exactly I'd like to put in there yet. Probably some sort of mural including the bluffs around my town, Devil's Tower, a jackalope, the Tetons, some geysers, and War Memorial Stadium, of course!

The "Wyoming Authentic, Wyoming Proud" on my right shoulder was just done last year. It took about an hour and a half, again taking two sittings. This one is by far my favorite of the two. It really expresses my pride for being a Wyomingite and my love for the state and the university.
I haven't had a chance to get my Bronze Boot inked in yet, but it will be done soon. I'll probably stick that one on my chest on the right hand side under my collarbone. Rule #1 for tattoos for me: If you're going to get them, make sure you can wear shorts and a t-shirt and be able to have them covered. I'm a businessman, and I feel like having a bunch of ink on my forearms would hurt my professional credibility. 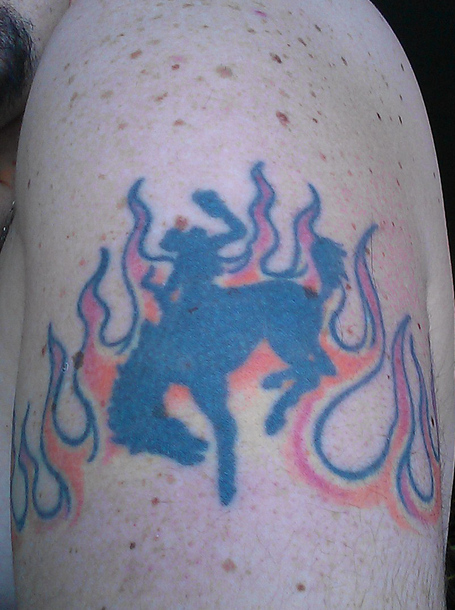 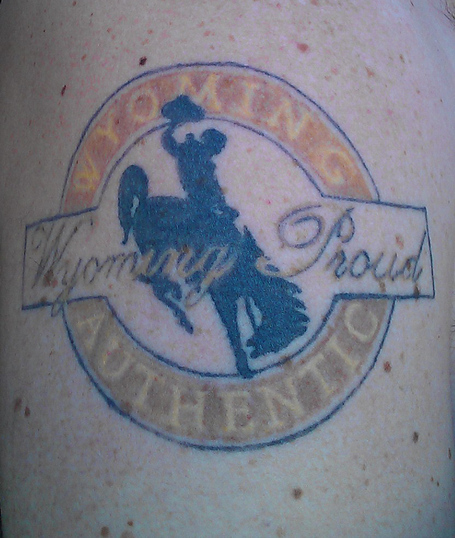 What are some of your favorite elements of game day in Laramie? What are your MUST DO's for people taking in their first Pokes game at War Memorial?

What's not to love about gameday in Laramie? The new Summit View lot is a huge upgrade from the old dirt lots of a few years ago. My friends and I have gotten pretty good at tailgating since we've had a decent place to set up.

It's funny that you should ask what my must do's are for a person taking in their first game at The War, because I just introduced a friend to gameday in Laramie for the first time at the San Diego State game. The first thing you have to do is wander around the parking lots and get a look at how different groups tailgate. There is a pretty wide range of fans in Laramie, and they're all very welcoming. You should also go check out the official tailgate lot on the southwest corner of the stadium. There are tons of things for fans to do over there. Watching the live bands, listening to the Western Thunder Marching Band and cheerleaders perform, hitting up the various food and beer tents, watching marquee games on the big screens, and plenty of games for the kids are all available.
Take yourself on a tour of the facilities. The Indoor Practice Facility, Arena Auditorium, and War Memorial Stadium are all open to the public, and they have some great traditions associated with them. The trophy cases and Wyoming Athletics Hall of Fame plaques in the AA are especially cool.
Before the game you should see the "Cowboy Walk" where the players walk from the team hotel to the stadium surrounded by fans. It's pretty cool watching the players interact with the people that cheer them on. You should also be sure to be in the stadium around half an hour before kickoff to catch the end of warmups, player introductions, and the intro video. I make sure to warn first time fans that the cannon goes off at every opportunity, so brace yourself!
There are a few things that every fan WILL know by the time they leave War Memorial Stadium for the first time:

1. The words to Ragtime Cowboy Joe and In Heaven There Is No Beer
2. 30,000 rowdy fans make for a great gameday atmosphere
3. There's nothing like Wyoming Cowboys football. No matter how good or bad the team is, we are the most unique team in the country.
4. They will be back. I have yet to take someone to the game that hasn't made it to another game.

Here are some pictures of his Brown and Gold custom Chuck's and his custom beer pong table. 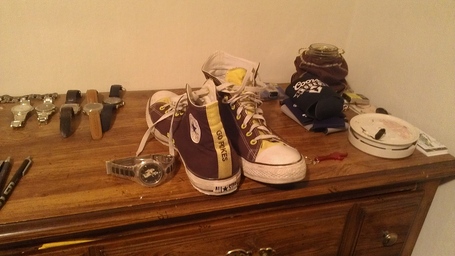 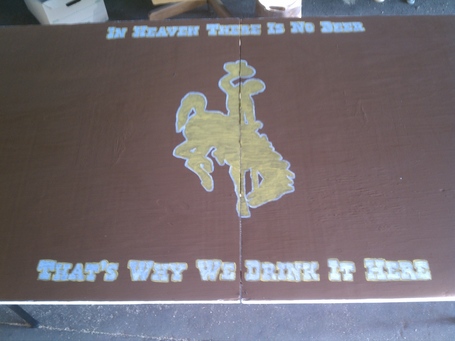 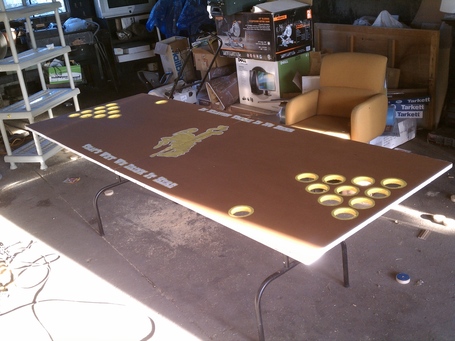 Congrats to WYO1016 on being the winner of the Cowboy Altitude Fanthropology contest. He will now go against other site winners to see if he wins the grand prize of tickets, hotel and airfare to any bowl game courtesy of Hyundai.

By commenting below, you are subject to and accept the terms and conditions of the Hyundai Fanthropology Sweepstakes.