Due to severe budget cuts handed down by the Wyoming State Legislature the University of Wyoming is being forced to reduce or eliminate several programs. This new budget will start in August with the beginning of the 2012-13 academic school year. The University is being forced to cut $10M from it's current budget and several programs are effected. Two campus construction projects are now canceled that would have built a new Agricultural research laboratory. The biggest hit is coming to the music department and the entire elimination of the Western Thunder Marching Band.

"Due to dropping natural gas prices the Legislature is forecasting a much smaller budget in 2013 and as a result we have had to tighten our belt as well." stated UW President Tom Buchanan. "This is a very sad day for the University and I greatly appreciate the work that Brad Williamson has done with Western Thunder since taking over in 2009." added Buchanan. This is certainly going to have a huge effect on the atmosphere on game day in Laramie. The band has a tradition of playing at bars around Laramie the night before home games. They of course perform at halftime of every Cowboy football game as well.

Luckily the University does have a plan in place to provide entertainment for University sporting events. Buchanan and Wyoming AD Tom Burman have replacements set for Western Thunder that is much friendlier to the budget. "We know that Cowboy fans loved the performances by Western Thunder for these last several decades" said Burman. "That is why we worked hard and were able to secure a quality set of the amazing band The Rock-afire Explosion." 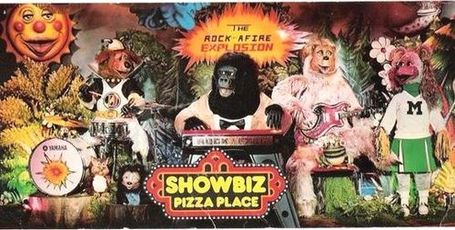 The Rock-afire Explosion are an all animatronic robot band that performed at Showbiz Pizza during the 1980's.

Now it is easy to have the band play any song the school chooses for a game. The music and movements just need to be programmed using special software and then the band will perform all the appropriate movements. Fans favorites such as Ragtime Joe, The Beer Song and Cotton Eyed Joe have already been entered into the database.

The band can perform anything from classic rock to the latest hip hop hits. "The versatility of the Rock-afire Explosion was a huge selling point to us. We wanted an act that could appeal to all generations. The fact they work for free and don't require any new uniforms or instruments are a also a big plus." added Burman.

The band can also utilize humor in their act. Music and comedy is a fantastic combination that will really set Wyoming apart. Burman also seems very excited that the band can be easily packed into crates and shipped via semi truck to any bowl games. That is much more affordable then flying any entire band and their instruments on a commercial flight. The school also announced a sale starting on April 1st for all the instruments used by Western Thunder. Come on down and get yourself a shiny and only slight used sousaphone for a steal!