A Trip Back To 2008: Wyoming Cowboys Vs Ohio Bobcats

Share All sharing options for: A Trip Back To 2008: Wyoming Cowboys Vs Ohio Bobcats

With the MTN ending quickly I've been spending some time the last couple weeks browsing their schedule and trying to record as many Wyoming games as possible. Without a network dedicated to the Mountain West these games will probably never be televised again. I've only had the MTN in my home for the last year, so I missed many of the earlier broadcasts.

One game intrigued me was the 2008 season opener where the Cowboys hosted Frank Solich and the Ohio Bobcats. I had never had a chance to see this game televised before. It took me like five times but I was finally able to see the whole game. It wasn't because it was a boring game, actually it was very dramatic. I ended up watching the game late at night when I was pretty tired. I watch the first half in one solid sitting. Next time I picked things up in the second half where I eventually fell asleep late in the third quarter. Twice more I attempted to finish the game but always fell unconscious with about five minutes remaining. I gave it another shot today and finally saw the Cowboys hold on to win 21-20.

The point of this article is not to recap a game that is four years old. But to see how far we have come since that time.

The game was of course broadcast on the MTN. The announcers were James Bates and Todd Christensen. I've always liked Bates but felt that he overused his catch phrase "bounty hunter defense". Christensen didn't have his mustache but he was still incredibly annoying. I'm surprised he didn't just dress as an Ohio cheerleader, since that is basically what he did for 60 minutes. 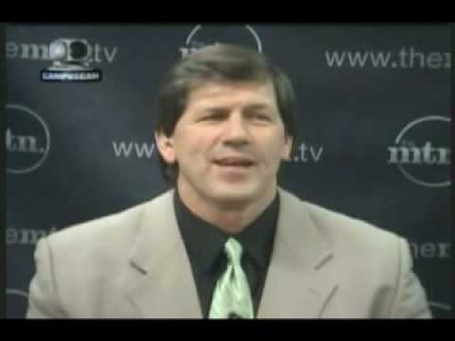 Maybe he is just really good buddies with Frank Solich. He was not getting the Cowboys any credit, especially Dax Crum. I'm not sure why Wyoming was punished so severely over the years with Christensen in the broadcast booth. CBS Sports better not find a spot for him.

This 2008 season was the final year of the Thunder and Lightning duo of Devin Moore and Wynel Seldon. Joe Glenn was on his way to a 4-8 season and a pink slip. Dax Crum was the QB for this game but the Pokes played musical chairs the rest of the season. Crum, Karsten Sween and Chris Stutzriem were all bad.

The Gipson brothers played their first game together with Tashaun a freshmen and Marcell was a sophomore. They interviewed the Gipson family who was there attending the game. Bates actually spent sometime talking about their younger brother Teriyon Gipson who was only in eighth grade at the time. Now he is a senior and a three star running back. He injured his knee last season and only played in six games. Hope that he is fully recovered, it would be great to see a third Gipson brother wear the Brown and Gold.

Josh Biezuns was playing fullback as a freshmen for the Pokes. It is amazing to me that Coach Christensen took this run focused team, installed a spread offense and then managed to make it to a bowl game in his first year. Wyoming is now just finally getting their personnel fully installed that was recruited to play in the Pokes offensive scheme.

Make sure that your tune into the MTN tonight and tomorrow. They are running some great highlights shows that showcase the best in Mountain West sports over the last six years. That won't be possible in June.