The Mountain West will expand by two schools today and the WAC takes another step closer to death's door. The two newest members will be announced this afternoon are the San Jose State Spartans and Utah State Aggies. These twoadditions don't really make most fans excited like the last round of expansion did. Still I thought it was important to give our new conference mates another look and see what they offer.

The Spartans are a powerhouse in collegiate Judo with at least 43 titles. That pretty much sums ups their athletic prowess.

Despite being in the Bay Area, SJSU is pretty much an afterthought after the pro teams and Cal and Stanford. Attendance is poor for most sporting events and the product on the field hasn't exactly been stellar either. The school colors of gold, blue and white are ugly in my opinion but I'm fine with it because the Spartans don't present a huge challenge. They are somewhat adorable losers with a unique color scheme.

The best thing about San Jose State is that Wyoming has been able to steal a couple good quarterback commits from San Jose State over the years. Thanks for ACS and Brett Smith, they've been great for us. That may be harder to do in the future now that we will be in the same conference. We can't play the "WAC is dying" card much longer in the recruiting game.

Still the football team went 5-7 last year and was eight points away from going 8-4. The basketball team is atrocious. One big reason there was an interest in San Jose State is that they field a men's cross country and a baseball team. Two sports the Mountain West needed to add teams in order to meet NCAA standards. I'm not really sure why you the Spartans are here. However I do know that it wouldn't be impossible for me to convince my wife to visit the Bay Area with me for a game. We will appreciate the victories each year. 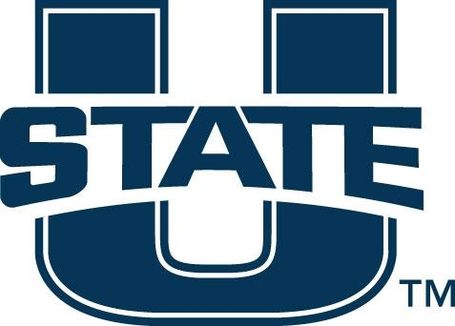 After years of trying to join the Mountain West the Utah State Aggies have finally made it. The funny thing is that they could have joined earlier but they decided to be loyal to the WAC and BYU. That worked out really great there fellas.

At least the Aggies finally updated their logo recently and will now be getting some Nike Pro Combat uniforms. I hated the lopsided "U" with STATE written vertically.

On the football field the Aggies haven't had much success until recently. They went to the Famous Idaho Potato Bowl last year and also whooped up on the Cowboys in Logan. The schools had a four game series that will now have the three remaining games canceled since they will be conference games instead. Three Utah State players were drafted this year including two running backs.

The basketball team has always been strong and packed their arena called the Spectrum. There has been a reluctance to play quality non-conference teams on the road. Hopefully that will change. Their addition in basketball is solid and football is on the rise. Even though they are in Utah I expect Aggie fans to be much easier to get along with then BYU and Ute fans. Don't disappoint me here.

What do you think of the new members of the Mountain West?