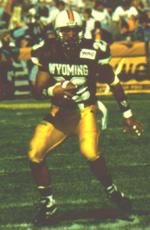 Image Courtesy of the University of Wyoming

SB Nation is establishing their own college football Hall of Fame. This is for players who are not already in the current college football hall of fame. Basically the real hall has several archaic restrictions that prevent some fantastic players from making the cut. We are setting out to honor those distinguished players that deserve to be among the elite.

Here are some of the basic rules for nominations:

Nominate as many as five players from the following positions: QB, RB, WR, TE, OL, DL, LB, DB, ST, and Coach. Here are the requirements for eligibility:

1.) For Players, or Inactive Coaches: Players or inactive coaches must have been out of college football for four full years. That includes from 1962 up until the 2007 football season (into 2008 bowl games).

2.) For Active Coaches: Coaches who have not finished their careers by the 2007 football seasons will have had to have served in their current position for at least 5 years. Note: coach must have 5 years at certain position, not 5 years at a school.

Instead of trying to push for five players or coaches I decided to put all the effort into one player. In the 1990's Wyoming was known as "Receiver U" for it's ability to produce incredible wide receivers. The two players at the top of that list are Marcus Harris and Ryan Yarborough. Both had outstanding careers in Laramie and deserve to be in the hall, however we can only nominate one player per position.

His story and stats are posted after the jump and show exactly why he should be a first ballot member.

After playing for Wyoming from 1993 to 1996 Marcus Harris left the Cowboy and NCAA records books plastered with his name. Not only was Harris talented but he was also consistent, he produced eye-popping numbers every single year as a starter.

Check out his careers stats:

Here are his year by year stats at Wyoming:

He barely played his freshmen year as the Cowboys already had a star receiver named Ryan Yarborough who was in his senior year. From 1994-96 there was no one better as Harris spent his time breaking most of the records that Yarborough set. His incredible stat totals put him in exclusive company in the record books.

As a senior in 1996 Harris helped lead the Cowboys a 10-2 record and #22 ranking. Wyoming faced BYU in the WAC Championship game but lost 28-25. The Pokes were left out of a bowl game despite their high powered offense and Top 25 ranking. That season Harris set a NCAA record for 4,518 career receiving yards and led the nation with 1,650 receiving yards (fourth highest in history). He was named the winner of the Biletkenoff Trophy which is given to the top receiver, and was a consensus All-American, earned WAC 1st Team and WAC co-offensive player of the Year. Harris is one of only two Wyoming Cowboys to earn All-American honors twice.

He also left his mark all over the Wyoming record at the same time.

After college Harris was drafted in the 7th round of the NFL Draft by the Detroit Lions. Harris certainly belongs in the college football hall of fame. His spot in the SB Nation College Football Hall of Fame should be guaranteed.

After Harris graduated and went to the NFL, coach Joe Tiller left for Purdue as well. Unfortunately the Cowboy football program took a steep nosedive afterwards that took over a decade to rebuild.

If you have another players you feel are worthy a nomination let me know in the comments. Anyone have any favorite memories of watching Harris play in the Brown and Gold?