Share All sharing options for: New FieldTurf Planned For War Memorial In 2013

It will be a busy summer at War Memorial Stadium. While the football team gets some time at home crews will be preparing to install the new FieldTurf. The project is expected to be completed by mid July. The old turf was well past it's prime and was incredibly faded and did not look good at all on TV.

We've posted the new design up above and I'm certainly happy with the way it turned out. Here is the full breakdown of what is included:

The new elements of the design will include a depiction of Wyoming's iconic Teton Mountains in both end zones along with the traditional words "WYOMING" and "COWBOYS" in brown on a gameday gold background in opposite end zones. Those words will appear in a new western-style font for the coming season. Also new will be the lettering "7220 Feet" on both sidelines, indicating the elevation of War Memorial Stadium as the highest NCAA Football Bowl Subdivision field in the nation.

Jonah Field will continue as the name of Wyoming Football's playing surface to commemorate the generous donations to UW Athletics by Mick and Susie McMurry and John and Mary Ann Martin and their families.

Wyoming's traditional "Steamboat" symbol of a bucking horse and rider will remain at midfield in brown, outlined in white and gameday gold.

The new field will be much more identifiable and having the Mountain West logo in team colors is long overdue. I love that Wyoming is embracing it's western heritage with the font in the end zones and mountains as well. The alternating dark/light green every five yards is a nice touch as well. Nice job by the UW Athletic Department here.

What do you think of the new turf? Love it? Hate it? Marry It? 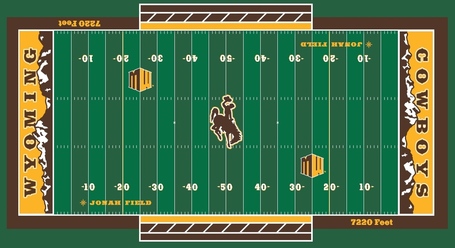