Bold new look for the Cowboys is now finished.

The biggest project this summer on campus has been the instillation of the new FieldTurf at War Memorial. The bold new design gained plenty of good publicity for the Pokes when it was announced in the Spring. After a couple weeks of hard work the new turf is now fully laid.

The football team posted several great pictures of the turf being installed via their Twitter account @CowboysFootball. All the pictures are courtesy of them. First the turf was removed in large strips using construction equipment.

The first turf started being rolled out on June 14th. 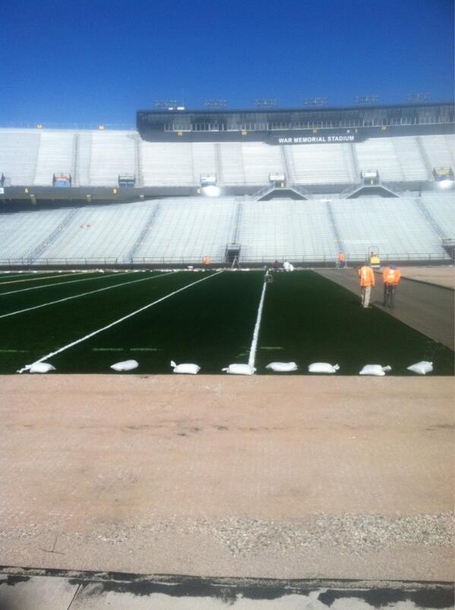 The new turf is bold and and one of the most eye catching fields in college football without having to resort to a colored gimmick field. The biggest highlight is the new end zones with feature a bold image of the Tetons and have WYOMING and COWBOYS in a western font. Here is a nice close up of the south end zone 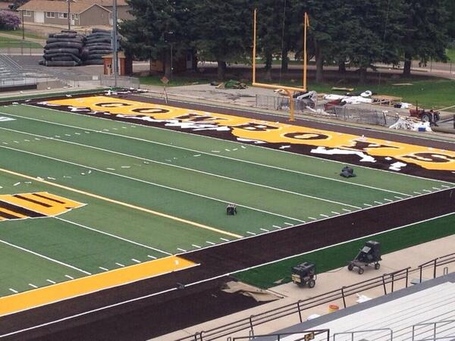 Once all the turf was finally installed the chopped rubber filler needed to be spread. The detail in the end zone made this to be the most complex design ever installed by FieldTurf.

The Cowboys home schedule is much more favorable than the road section for the Pokes. Wyoming will have a decent chance of going undefeated on new turf in 2013.

Here is the home schedule for the Pokes:

I would expect the Cowboys to be the favorite in five out of these six games and they beat four of these teams last year. The biggest challenge will be Fresno State who crushed Wyoming last year 42-14 in the Bulldogs first year in the Mountain West. Northern Colorado is a weak FCS program and Hawai'i struggled mightily. The Cowboys will need to take full advantage of the friendly confines of War Memorial if they hope to earn a trip to a bowl game this year.