The countdown to kickoff keeps getting smaller and smaller as we approach Saturday.

It's hard to believe that we are just three days away from college football starting and five days from Wyoming taking on Nebraska.  This will be a busy week on Cowboy Altitude as we prepare for the Cornhuskers.  Our weekly segment "Panel of Pokes" will soon return with our panel from last year plus a new addition.

The coaches from both teams spent the day talking to the media and trying to say relatively nice things about their opponents.  Nothing earth shattering was divulged but the bigger news was Wyoming releasing it's depth chart for week one.

They didn't post an updated depth chart on the website but Robert Gagliardi broke the highlights down quite nicely.

Here are the highlights:

Wyoming will be going with the Stormtrooper look in week one.  The new white pants feature a brown Steamboat on the left quad - I'm a fan.  This is the same look as last year for the game against Texas.  Just my personal opinion, I would have preferred the white helmet with the gold Steamboat.  I've always been a fan of that helmet.

I hope they continue to tweet out the uniform each week. 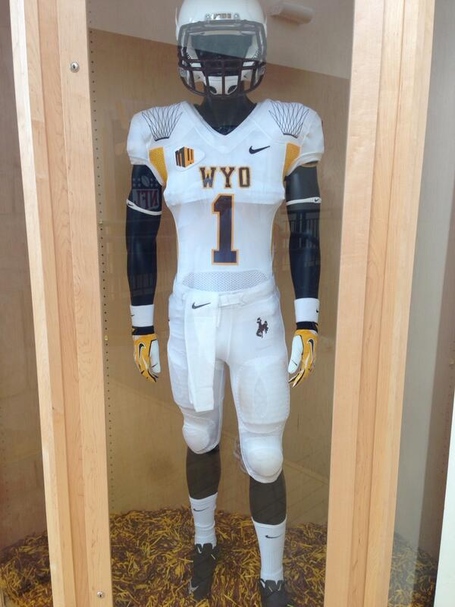 Here a nice video that the Mountain West put together.  It includes interviews with Brett Smith and Marqueston Huff.